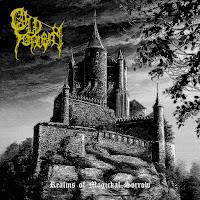 Dungeon Synth can almost seem like a cliche of itself at times. With the similarly Old Tower fresh in ones memory, the haunting grayscale cover, a gloomy castle and cryptic band logo sparked my amusement, especially the name. It was as if a "starter pack" meme had been taken to heart. This is no fault of the Finnish musician but having consumed an abundance of this music, its tropes are often laid all to bare. I'm glad I didn't pass it over, Old Sorcery does indeed have a magic worthy of attention.

Opening with its decrepit lurching synth and lonely washes of airy ambience drifting from its piano chords, the slow paced drawl of decaying nostalgia unfolds without surprise. Its atmosphere holds majesty and wonder, a sense of lost grandeur, magic and might, buried by time and dust. Its at eight minutes that the artists flair comes to light and a new dimension is steadily pried open with a deepening sense of wonder.

Reminiscent of Tangerine Dream, Jean Michel Jarre and the likes of early electronic acts, the hypnotic whirl of a lopping oscillating synth seemingly rises from the ashes. Although standing at odds with its stereo panning, heightened pace and differing melodic intent, its steadily gains a foothold with the contrasting sound. At this point a psychedelic journey has begun. Realms Of Magickal Sorrow makes its distinction as a record with something different to offer the Dungeon Synth scene.

It would be quite straightforward to deploy this technique of swirling synths, wavering in pitch and volume, to induce an entrancing temperament. Old Sorcery however redeploys the power of oscillated synth tones with powerful subtlety that clings so frailly to this hallucinogenic vibration. One can envision secrets kept in keeps of cold stone as plants and herbs, guarded secrets of an esoteric cult.

The second track, Vaikerruksen Portti, uses a similar synth setup to the first track but with laser zaps and more electronic instrument design accompanying it. Both halves go strong, the Dungeon Synth side toys with mischievous melodies in the forefront, backed by dark organs and deep choral voicings. Its a loud and powerful outing to play up the unique union. A Lost Soul Amid The Listening Trees finds eruptions of gleam and glory, horns and glistening synths dazzle between the long and yearning stretches of shadowy ambience. It has a foreboding presence devoid of electronics.

In A Forest Trapped, those glistening synths return for a sleepy track of yawning pace with a dreamy persuasion. It builds to playful melodies before we arrive at the final track, possibly my favorite. Further Beyond The Melancholic Horizon opens like an Old Tower track, deep drones of devilish dreariness, lost in the distances. One can hear the deep gong strikes and an eerie fuzz of ambiguity. Suddenly it gives way to a different composition, then taking a few minutes to arrive at the final destination.

The next few minutes ponder the infinite, the synths ripple into the void, minimalism and subtlety slip into madness. Its a glorious moment in a song that goes through some vivid transitions that work masterfully. I did not expect to find such a rich experience within this genre I feel can so easily be overplayed. Old Sorcery has brought a sequence of deeply curious ideas that play into the dark, spiritual, meditative flows I just love. With another two albums, there is more to discover now.