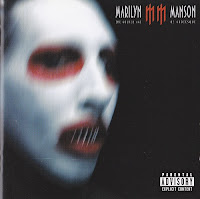 It took me some time to get around to this record, having got into Manson's music last year I started with the classic "Trinity" of records and my research and reading into Manson's career indicated this was the record where he "fell off" and things started to change. I finally gave it a spin and instantly enjoyed it, having now thoroughly enjoyed this record I can certainly hear its weak points but am a little mystified as to why this album wasn't received well by critics. Its everything Manson is about, orchestrated like a finely tuned weapon of blasphemy aimed at the masses, covered in glossy a deceptively approachable listen.

The record kicks off with "This Is The New Shit", a song that gives you a belly full of what the albums tone and context will be. Making a mockery of trends and pop culture through defining itself as the "next thing", Manson executes a very direct approach that gets straight to the point, at times it works great and in others the lack of depth or obscurity in the lyrics does leave much to be desired. "This isn't music, and were not a band, were five middle fingers on a mother fucking hand" from "Vodevil", the records best lyric of this style, a very blunt and aggressive statement that hits hard, unfortunately these moments are just a handful.

Aesthetically the album is ripe and potent, an infectious noisy production with fantastic distortion on the guitars that feel overdriven to hell, yet have a crisp, sharp, razor blade tone that transforms some rocking riffs into full on head banging, moshing monster riffs. The guitars are not the sole focus though, theres plenty of space for them to drop out and give a range of electronic noises and drum machines to create paranoid, dark atmospheres along with bass lines that step up the tone and distortion and make themselves an important part of many of the albums tracks. The writing is catchy and heavy on the hooks which dominate the songs, so much so, many of the tracks lack a bit of variety and depth where they repeat with the same hooks.

The album flows really well, mixing up the more aggressive numbers between the peculiar, outlandish atmospheres and style this record broods in Manson's artsy moments. The song "Para-Noir" captures the records best qualities, creating a menacing atmosphere with Dita Von Tease's domineering taunts brooding and provoking a driven response from Manson as the record explodes with ever powerful guitar riffs. The album does fizzle out with a cover of "Tainted Love" I've never enjoyed, followed by a carnival of horrors track and another atmosphere driven song that doesn't excite much, the record could of ended on a high with "Vodevil" for me. Overall its a vibrant, blasphemous rock and roll record of unforgiving attitude that has some obviously flaws but Manson clearly did exactly what he set out to do with this one.