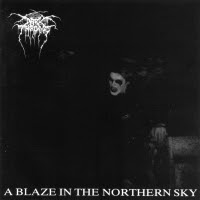 In recent weeks I've been in the mood for revisiting old favorites and Norwegian Black Metal outfit Darkthrone are among them. Its been well over a decade since I discovered this band and their rebellious music, for new listeners in the genre Darkthrone are often one of the first names to crop up with one of the earliest records in the emerging scene and a prolific influence on the future direction of the genres sound that many of bands would come to emulate. "A Blaze In The Northern Sky" is the first of three records known as the "Black Trinity" or "Unholy Trinity" that marks a crucial part of the bands history as well as introducing the forever copied minimalist black and white album artwork including the classic corpse paint. In the next two posts I will cover the other records that make up the trio.

In 1991 Darkthrone released their first full length "Soulside Journey" an unremarkable Death Metal record that gave them a foot in the door when shifting sounds. Convinced by local musicians to change their sound Darkthrone would be among the first to release a full commercial record as a Black Metal outfit thanks to their record deal with Peaceville records. Although this record doesn't resemble anything along the lines of Death Metal, a closer inspection reveals some left over characteristics that would be non-existent in the follow up "Under A Funeral Moon".

The record starts with the classic 11 minute "Kaatharian Life Code", a deep satanic chant cries out between the echoing tom drum and eerie, hellish synths that create a soundscape of satanic mysticism. Before long it crashes into screams, blast beats and wailing Black Metal guitar shredding. The records aesthetic is sharp, cold and dense, the guitars have a fuzzy and thin tone that spreads a fair range over the warm but unfocused baselines. The drums hammer and drive these songs with a surprisingly flat and sterile quality. It comes together with a charm, magnified by Nocturno Culto's haunting screams, the rough and raw texture of his vocals burying themselves in the excessive, but short reverb. I may of listened to this record too many times, but it sounds fantastic for such an early record in an experimental genre.

Despite nailing the aesthetic, there's much to be said about the guitar work and general tone of the record, although frosty and grim on the outside the mood and undertone of the record isn't quite on the same wavelength. It may be a collection of great songs but the death metal influences are very distinct with the blast beats dropping the kick first instead of the snare, snare blasts being a staple feature in Black Metal. Many of the guitar riffs have a warmer tone and display many techniques commonplace in Death Metal. It sounds very much like the riffs were adapted in their transition between sounds and played at different tempos. That's just an observation though, Its a fine record with a continual churning over of power chord driven songs with plenty of head banger moments.