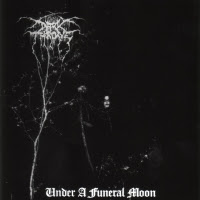 Of the back of their transitional record "A Blaze In The Northern Sky" Darkthrone set out to write a purist record that would cast aside the remnants of Death Metal and delve deep into the spirit of the Black Metal scene. The result is a horrifically dark, chilling and blunt record with a strong satanic message. It brought about techniques, musical ideas and a classic low-fi production aesthetic that would have a vast influence on the future of the scenes music. It was also the last record with second guitarist Zephyrous who left the band as a duo that are still writing music together to this day.

The record opens with an ambush, "Natassaja In Eternal Sleep", dropping us immediately into what feels like the middle of a song with a temperate, ugly scaling guitar riff leading the way, the vocals drop in with a similar mid-song setting and we get a taste of the many rebellious, almost "anti-music" ideas this record experiments with. As suddenly as it starts, it ends, with the song simply fading out sharply, mid riff, after the last lyric is howled "And Natassaja, I'll get these god dam angels drunk".

The lyrics are a merit of their own, but the delivery and execution of Nocturno Culto's wretched screams are sublime. Working with both an immediate and delayed reverb, his snarl and throaty howls feedback on themselves before echoing out into the track. The texture is menacing and shrill, combined with the evil and sinister lyricism he comes off like an anti-christian weapon of malice, haunting us from beyond this realm. On the records title track Culto's walks us through the proceedings of satanic ritual with a chilling nocturnal lyricism, "Drinking the poisoned blood, I enter my shadowed coffin, two goats horns in my hands, I raise my arms and close my eyes, to receive the infernal hails from my brother in the land of the damned". Frightening stuff if you choose to take him seriously. I can't help but take it with a pinch of salt however I think the mood and tone of the record makes their beliefs and intentions very clear.

The records production is a staple mark of the genre as the band pushed extremes and opted for a low fidelity sound to satisfy their rebellious "anti-music" fever. The guitars have a thin gristly fuzz distortion that feels narrow and evasive, the drums rattle and clash through a claustrophobic lack of dimension. The bass is buried in the haze and the performance has a fair few mistakes and inconsistencies that add to the charm. It was an intentional decision to downgrade the fidelity and it served as a feedback loop to bury the music in an unforgiving sound that would reinforce the ideology. Having listened to this one so many times Its become the norm, almost hard to imagine when I first discovered these record and saw a peak of light through the black, tarnsihed front.

Collectively its a flawless, cohesive collection of ideas executed sublimely but Ive always felt a selection of songs out-shined the others, leaving it slightly short of what would be a "perfect" Black Metal record. Exploring many dynamics of mood, tone and general "evilness" the group even throw down a slamming satanic beat down on "Summer Of The Diabolical Holocaust" that makes a masterpiece out the simplest use of rhythm and power-chords possible. It climaxes with a cryptic, wild guitar shredding solo that wails a noisy mess of sound in an almost piss taking tribute to guitar leads. The rebellion is real with this record, its black, bone cold and not for the light hearted. Beneath its ugly menacing exterior lies an exciting musical adventure that pushes all boundaries.