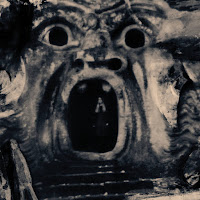 Her previous ambition, Dead Magic, was a riveting record upon discovery. Since then its been a frequent return, always delivering its beautiful sorrow and engulfing esoteric spookiness. I brought All Thoughts Fly in the blink of an eye, not knowing it was not a typical release. Devoid of her captivating voice, the record is an instrumental piece, recorded entirely on a pipe organ. The initial disappointment soured my first few listens as I yearned for the music to give way to other elements. Having now grown accustom to its dimension, I hear the foundational building blocks of her "normal" music being deeply explored in the various moody temperaments this record offers.

Three to four of these seven songs explore a cold, glum macabreness. Funeral sadness and crushing sorrow permeates the room in the rich bellowing fog of a dense, burdensome organ tone. Its dark, lonely and tearful in its most penetrating moments. Sacro Bosco acts a bridge between halves. Initially mysterious, Anna uses stereo panned low notes over ambiguous fuzzy noise to build the song into a magical realm. Its quite impressive how this was done with just the pipe organ, however one can imagine reverberations, loop pedals and other processing tools may have come into play to forge such a layered and dense sound the music wanders into often.

This magical, esoteric side is better explored in the opening number. Whirling sounds of sparkles flutter by prodding instruments, bursts of notation climbing from rumbling lows to spectral highs in a cyclical nature. Its ambiguous and entrancing, yet its later spells, including the lengthy title track, tend to lull into a drone as its swirling, looping nature becomes jaded in its own shadow. It may move through phases but the unrelenting spiral of notes ends up becoming a heavy wash of background radiation.

There is an impressive quality to this record with knowledge of how all the mysterious, atmospheric and ambiguous sounds that emanate, came from a lone instrument. It sparks my curiosity. How many layers and plugins where used for each song? The depressive church organ songs clearly used less yet in some of the musics build ups there is a lot going on to digest. All Thoughts Fly possess some spellbinding compositions yet in its duration frequently becomes dull and droning in its final stretch. One can clearly hear the foundations of her unique music, the scope of which is greatly elevated by her voice and accompanying instruments. There is of course no reason not to pursue an ambition like this, however it didn't feel like it could yield anything being the normative scope.