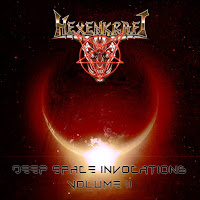 Being rather fond of this Doom adjacent darkly Synthwave ride into the depths of hell, I thought I'd give some time to this new two track EP, having now built up an itch for the ever delayed full length debut Permadeth set to arrive some time in the future. Unlike Volume I its cuts are half the length but twice as intense, taking a massive influence from the Doom Eternal soundtrack. Gone are the acoustic guitars, soft strings and general meandering to the unsettling quiet of space and nature. These songs ride percussive strikes and dense wave synths to the edge of oblivion as danger lurks nearby. Its breaks for respites always pull one back into the action like a force of gravity. Its synthetic edge bleeds the lines between tone and force as it ebbs and flows in rhythm and shimmers of melody as notation whirls in its dark frenzy. Its always intense, like a spree of action with moments to catch your breath, knowing you've got to do it all over again.

Its reminiscence of Doom Eternal is uncanny. Although devoid of big chunky Djent guitars, its follows many of the same tropes and tricks to create a hellish synth atmosphere for action and carnage in other worldly environments. Track two, Devastated, feels like a guilty partner for its blaring siren like buzz saw cutting in and out of focus like a heart attack. Going purely off of memory, this is either a lifted idea from the Doom soundtrack or a brilliantly crafted inspiration that would also fit sweetly into the games audio, which in turn complimented the gaming experience massively. These are two of Hexenkraft's best executed songs, yet closely ride the curtails of another beast. Most important though, they are fun, engrossing and immersive even if short lived in the eight minute runtime. Its craft is focused and doesn't need to go beyond its means, unlike its predecessor which felt as if it had room for something more.