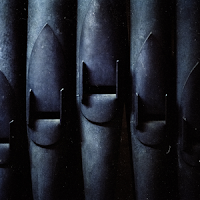 Stepping backwards in time, we arrive upon Swedish songwriter and Organist, Anna Von Hausswolff's sophomore record. As The Miraculous hinted, the engulfing esoteric gloom and might of her burdensome terror had yet to emerge. Ceremony feels rather undefined in its direction, closer to musical traditions stemming back to the 70s with songwriting, moods and templates that are yet to diverge from common and folksy sounds. Darkness is the flavor she brings but in this outing its just a shadow of the witchery yet to be discovered, more of a still and sombre grayness gently cast.

Interchanging her operatic voice with pipe organs and an array of string instruments, these calmed song temperaments gracefully cruise by. The second song Deathbed is the one track indicating her future direction. Its bludgeoning Doom Metal drone and grating guitar chords spell horror between her voice and colorful organs giving pause for light. The record then meanders into a string of bare and minimal musings, before traditional elements emerge towards the end, tethered to her subtle gloom.

I could get deeper into the particulars, her voice and instrumentation echoing strong feelings from many a musical style and artist heard before but that alone was the key take away. Rather than striding into new territory with something to shock and awe, at this stage Anna was still finding her feet, writing wonderful songs that have been enjoyable and even moving on its better tracks like Ocean. Ultimately though, its all a bit infantile in the shadow that her future self will cast.