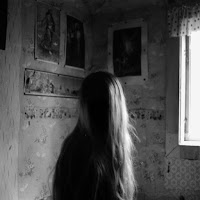 Searching for gems to talk about on my youtube music channel, reciting my words on the spellbinding Dead Magic was a reminder to continue my exploration of Anna's music. I recall giving The Miraculous a passing listen but now with intent I hear the formation of what was to follow. Two of its longer cuts, the thematic Discovery and sludgy Come Wander With Me, delve into the darkness with sprawling esoteric journeys to be fully embellished on her next outing. Cutting between its lengthy passing, a variety of compositions has the record peering into lengthy crevasse of darkly ideas briefly explored in there powerful temperaments.

It makes for a wonderful experience that doesn't quite feel as a whole but in no way empty. Anna brings her torment and shadowy expression through illustrious instrumentation ever poised by subtly and texture, always brooding its tones and melodic inflections in steadily brewing atmospheres. She is often forthright and powerful with her singing, rising up to swell with the music where it is right but also sitting out the instrumental sections that deserve limelight too. In a couple cuts she lurches back to the shadows, compromised by the darkness of the albums most ambiguous musical passings. Her words always with a distress.

There is much to be adored here, however its final three songs highlight the lack of flow that is overcome by the engulfing nature of these dense songs. Evocation takes another plunge into the monstrous lunges of slow and sludgy Doom Metal bordering on temporal with its snailing pace. The following title track pivots to winding organ piece of dense and heavy airy textures, an experimentation in droning gloom that sticks out as the biggest difference. Anna's voice briefly arises in angelic form as if to pull the music into its apex yet it drifts back into its duller phase without climax.

It all ends with Stranger, a subtle sense of a wild west theme permeates its accent, illuminated by the spangled acoustic guitar chiming in at its peak. This pivoting is what stunts a greater sense of what the record is. Many wonderful concepts are realized while its songs switch from one to the next. I have very much enjoyed the experience but I feel as if there were three or four distinct sounds being jostled, making it feel like a collection of songs over an album. This sort of esoteric and ethereal music brings that preference for a unified vision out of me when listening. Still wonderful though.