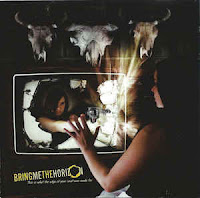 The rattling rustle of loose snare rolls, discordant guitars screeching, a brooding power chord rising and then an eruption of sloppy chugging riffs. It sends this classic record straight into uncomfortable territory as moments later the grip loosens with the hit-hat wafting over the silence between meaty slabs of chunky guitar funk. Enter the raspy scowl of Oli Sykes's divisive and ugly screams and you have the perfect recipe for music to split a crowd, in the context of both mosh pits and musical snobbery. Fortunately I landed on the side able to enjoy this controversial bands gritty sound.

It was at my first Download Festival in 06 that I mistook them for another act on the bill. I was blown away by the novelty of these black emo mop hair cut kids playing the "uber brootal" music. It was also my introduction to hardcore dancing where I quickly learned regular moshing would land you a punch to the face. From then I was hooked and till this day I never felt like anything else Bring Me The Horizon would do matched the unique charm this four track record caries. Its one of those bits of music you get right into every now and then and this latest binge leads me to write!

This Is What The Edge Of Your Seat Was Made For is a youthful riot of angsty rebellion and aimless attitude fit to cut a divide in the Metal scene. Some parts Metalcore, seeking the brutality of Death Metal, this bedroom band puts together a riff montage exploring their own ideas of heavy, hooked on the ugly, odd and obnoxious that you just can't replicate. Its a mindset, a moment in time manifesting into a bizarre riff fest of awkward guitar noise and breakdowns that I simply adore for all its flaws.

Its grey, scrappy aesthetic and trying performance may be sloppy and loose but just hangs in enough to land its ideas and rhythms right on the nose. The grooves land between the barrages of angular guitar noise and Oli's snarling throaty screams sound almost painful at times. It ends up like a charm all too akin to Metal yet constructed from a different ideology. The songwriting however is keenly convenient in this aesthetic as its progressive rollout of guitar riffs, with little repetition, keeps an interesting flow of rough around the edges ideas, landing with enthralling energy.

The last of its four songs ends up on a melodic tangent that derails somewhat from the core concept but within its first three strikes the breakdowns and "brutality" is so much fun. Each song gets its big moment for the crowd to split and go ham. Each song also finds catchy ear-worms to drive home with big shouts around its big breaks. "Nail The Casket One More Time", "I Hate All My Friends", "If You Think You've Alive, Your Better Of Dead". I've never looked deep into these angsty lyrics, written by then teenagers. They do however get riled up with the music in there spite ridden delivery.

Edge Of Your Seat not a record Id be keen to recommend but discovering at such an interesting time, right at the birth of Deathcore's bloom, gave it a personal nostalgic magic I've never been able to shake. It was fun and outrageous then and sixteen years later still has a punch that rarely fails to rustle. Such a peculiar record. No other band I'm aware of, or even BMTH themselves on their debut album managed to capture the spirit to be heard hear. Its an oddity but I absolutely love it!