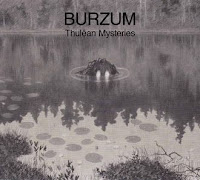 A year late to the party, this supposed final album from a musician of genius, wrapped in controversy, encompasses ninety minutes of estranged, spiritual and Nordic inspired ambient music. Labelled as a compilation, I initially passed it up. In fact its a compiled collection of original works from the six years since The Ways Of Yore. In the post-prison era of his career, Varg's ambient leaning creations had not sparkled with the magic of a Tomhet or Hliðskjálf. I wasn't expecting much but found myself pleasantly surprised to hear the peculiar sound that captivated much of my youth emerging again. Alongside a couple of reworked melodies from classic songs, much of this loosely arranged music dives into that special, lonely and timeless place.

With some solemnly spoken word and slightly sung sections, Varg brings a little Norse culture to a handful of songs that break up the flow with a tone rooted in heritage and mythology more so than the mystic. All his songs share the minimalist approach, a handful of simple melodies, steady in pace and calming in their presence. Repetitive and droning, many of these songs need little complexity to hold ones attention. Textural experiments with raveling distortions and whirling psychedelic synths droning on a handful of the longer tracks show he still has the knack for that deeply mysterious and nature inspired sound of a lonely darkness. Both chilling and soothing in its unforgiving starkness and archaic presence.

A Forgotten Realm stands out as a unifying track to bring all thees concepts together. Lumped in the midpoint its arrival is like all the others, without intention. The albums flow is unstructured yet enhanced through repetition as familiarity sets in. The lack of direction tends to aid the already lonesome and wandering mood these songs conjure. With many short one to two minute cuts in the first half there is an impression of ideas left unfinished. In the second stint where longer pieces reside, a notable shift to the denser tone fleshed with experimental reverbs and droning instruments takes place. In this stretch the music enters an entrancing meditative magic I simply adore.

I barely knew what to expect going into this record. His previous ambient works had been a disappointment. Given the nature of its release it strikes me as music inspired and composed without future thoughts to release it, despite that eventually happening. Given its lack of structure or focus the sound feels more lending to a mood than experience. It will be one to put on from time to time in search of that curiously esoteric yet relaxing sound linked to a Norse Mythology that only this guy can capture.