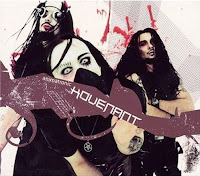 Embarking forth with a new name and shift in identity, Animatronic is their first album as The Kovenant. Nestled between last years Nexus Polaris and the later SETI, it represents the stylistic move towards Industrial Metal and electronica with a little of the former magic lingering. Reflecting on this with a more perceptive mind, it is a bigger change than I once remembered. The transition is held over well in vocal department where snarly shouts and brutish half screams anchor it to their former glory, along with Eileen Kupper's enigmatic operatic singing to usher in powerful melodies on their two best known songs. Mirror's Paradise and New World Order hit things off with an unforgettable union of catchy melodies, rocking riffs and stomping drums, all illuminated by Eileen and the strings that cruise between its Drum N Bass percussive cuts. Its a shake up of sounds, a melting pot of ideas channeled through clever song writing that appeals to popular fundamentals.

With such a strong opening, its a tough trail to follow but the remaining material explores different approaches to tone, pace and experimentation in well defined songs that form the unique feeling the opening two have. Mannequin dives into the downtrodden brooding the following record would dive into on a couple of songs too. Jihad brings an eastern melodic flavor to its crunching Industrial guitars. The Human Abstract ups the tempo with a fast paced thrashing romp lavished in glossy synths, akin to their prior effort with its more aggressive guitar tone and symphonic overdrive. All the songs have this over-represented keyboard presence that sways between club electronica and classic strings. It works wonders, beaming with prominence above the density of woven Industrial noises below it.

Home to two timeless classics, sadly Animatronic looses its footing in the closing as a couple tracks, missing the level of excellence excelled elsewhere. Prophecies Of Fire hails back to the carnival and jovial likeness of Nexus Polaris, almost like a left over reworked for this album. In The Name Of The Future recycles to many previous ideas and The Birth Of Tragedy seems an odd closing note for such a dramatic shift in tone as it explores a dark, paranoid, cyber aesthetic wonderfully. Most notable is the clunky cover of Babylon Zoo's Spaceman. Ironically It sounds like a flip of the original, where the mess between the catchy chorus was rather unappealing. In this instance The Kovenant do everything right except the hook which doesn't spark in the deep burly voice its delivered through. Animatronic is home to a potent, exceptional and inspired sound but as an album tends to decline steadily to a good from greatness. That said, you can't deny the brilliance of its opening two songs, forever personal favorites.