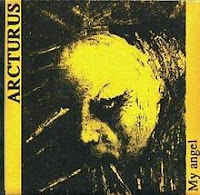 Finding myself on a Symphonic Black Metal binge of late, I turned my attention to Arcturus, an old favorite. Something then caught my eye, the release date! As far as the Norwegian scene is concerned, anything dated before late 1993 tends to carry a little mystique for the front runners who were involved before the explosion of popularity and exposure. This two song release is also considered to be the first inception of Symphonic Black Metal at a time where the 2nd wave sound was still forming its identity. I don't know how I never gave any attention before. Ive been aware of it since discovering this amazing band.

My Angel is one of those curious records that evokes thought over time and place, a band caught in a moment trying to find their footing with emerging musical ideas. It has soft remnants of Mortem, the Death Metal act these musicians were previously known as and with a strong shift away from that style the name change was certainly apt. The lasting aesthetic identities here are the iconic synth string tones, which feature heavily on their debut. That and a handful of compositions in Mortax give you an idea of where they will go. The drudging guttural grows and gloomy atmosphere will be left behind.

The record stands as a curious transition between music scenes and ideas. With the ideals of extremity and low fidelity yet to become hallmarks of the Black Metal genre, Arcturus pull on the slow pace of Doom Metal and simple power chord arrangements as their tools to sway towards evil and darkness. It takes on a haunting persona with the lead guitar on My Angel wailing like a lost spirit calling across fog swept moors.

The production is crass but capable. Sloppy and dissonant it carries a charm, one for the era you could consider a decent attempt at introducing these thick atmospheric key tones alongside the extremities producers where still figuring how to piece together. The second song, Morax, hit me as a three part song stitched together. While writing this blog I've learned they had a demo tape from the year before, further adding to the mystique. On that cassette Morax was split into three and alongside a synth intro, showed these guys had this sound together a little earlier than I initially thought! All in all a very enjoyable discovery for someone who thought I knew this all inside out!