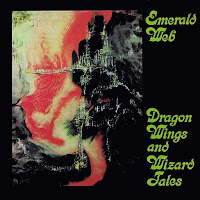 In recent years my Dungeon Synth curiosity has led me down interesting avenues. Fantasy music, Folksy Ambient works and the Psychedelic inspired early Electronic sound of the 70s. They all seem to have an intersection with this curious record that has outdated much of what Ive discovered, unraveling more of the unending map of musical influences. Id never heard of the Husband and Wife duo Emerald Web before, until hearing them appraised by Devin Townsend on a recent podcast. Described as New Age music, I wasn't quite sure what to expect. The promise of flute led songs had old prejudices suspecting I wouldn't enjoy this but for many of my recent discoveries, the likes of a Jim Kirkwood, this dimension has been opened up for me to explore!

What I have discovered here shares much of the mystique for natural beauty and nature I have come to adore in music. It emanates from an inner warmth and inspiration, carried on a care free breeze one can relax deeply to as its Flute is played with a force of personality by Kat Epple, who lends her soft voice too. The woodwind instrument is graceful and timely, drifting in like a leaf caught in the breeze, she swirls and swings through lively iterations between swooning on the soft cloudy texture of its notes, gracefully cruising by with a captivating gleam that I just adore!

Dragon Wings And Wizard Tales moves through many compositions, focusing on melodies from gentle acoustic guitars to creating scenic visions with innovative synths and a little soundscape work between with the blowing of dusty winds. It meanders beautifully, straying subtly into moments of wondrous experimentation that feels ripe of the heels of Progressive Rock. One of its best songs, Chasing The Shadowbeast, a nine minute epic, captures much of what the record offers through its expansive tale that swells with energy and Post-Punk baselines in the end. It gets there through a warm and steady build up resonating on some strong King Crimson vibes.

Leading up to that climactic moment, each of its songs feel like little flowers of inspiration, blossoming in their exposure. Flight Of The Raven captures a little esoteric melody and animated electronics in its conclusion to give a sense of seismic event. Twilight gets scenic with the chirping of birds with its dusky, spooky synths whirling like winds. It all comes together on Firenight as the driving force of its Psychedelic electronic bass line carries the aforementioned ideas on a journey to a full formed entity. The darker side of there sound reminding me of Erang in moments.

Lifeforce Celebration is another standout track as its choppy percussion fading in and out of focus echos of ideas all to common now in music but here a true force of originality. Its so intriguing to put these ideas in the context of the year they were released. Best of all, the music is endearing and has been a constant delight. At only thirty six minutes, its been on repeat a lot these last few weeks!