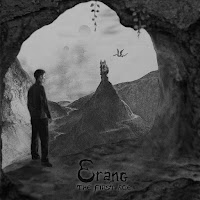 The vast and rapid output of Erang continues, a man with an unwavering inspiration for the vision of his kingdom brings us another installment, the forth this year? Seventeen in total? I'm loosing count but alas, The First Age may suggest a return to roots but his evolution as a composer sounds aroused and fertile on a handful of songs littered among a cast of temperate mood setters. Years of experience have blossomed into a craft for intertwining layers of simple melodies on reverberated instruments that hits home every time, commonplace yet spell bounding in the right mood. The First Age is memorable for its strongest tracks which jump of a track listing that doesn't stick to one direction.

A loose concept of returning is presented with the albums titles and knowledge of the various ages within the kingdom. Album opener "1986" has Erang narrating a diary entry under the downpour of soft rain as an industrious click clack bustles away on the typewriter. As his entry draws to an end a storm erupts, leading us on a retroactive journey, replaying clips and soundbites from past records as we swirl through a portal of sound, ending on the first Erang song "Another World, Another Time".  The concept of returning to the origin is explained but thrown off balance as a couple of tracks, notably the gloomy yet enchanting tones of "All Kings Must Die" & "Everything Is A Lie", deliver the ancient wonder of more traditional Dungeon Synth sounds, both their aesthetics and theme strike close to the classic Trolldom by Lord Lovidicus. Its found again later in the record but Erang's inclination to richer, luscious sounds has the vibes expanding into different crevasse.

"Birth Of A Shadow" hits a ghastly, dark note as graveyard bells ring out over a fog that creeps in as the night falls and we fall witness to harrowing screams and roars emerging from pain over the mischievous chanting of bells. Its cinematic, gripping, the music paints a scene to embellish in, one of his best. Followed by "La Nuit Noir" we change direction with another wave of inspiration as a stunning piano piece cries out its burden of mortal agony on crimson chords. Its lead hand far more developed than usual, given fluidity to break to conventional loops that dominate the music.

For me the record is marked by standout tracks, "Escape The Lonely Madman" another that needs mentioning for is slow and grueling of withering dread that collapses into ancient eastern cultural sounds that has one envisioning trade and travelers indulging under the desert stars, the shimmering of fires lighting their midnight engagements. The best of this record seems to be pulling from different sources and I'm not sure how I feel about that, the opening sets it up to be a nostalgic rewind which I didn't feel past a few tracks, on the other hand its an excellent set of songs where Erang continues his progression as an artist, yielding more fruits of the labor than ever. On a final note I just have to say the synth in "Unmasking" very similar to the Concrete Jungles game soundtrack, took me a while to make that connection, very similar synth instrument, had to boot up the game to confirm it.