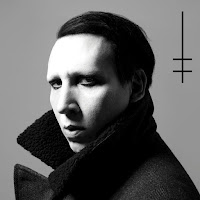 There's little bad to say about Marilyn Manson's tenth record. I could get critical and say it gets off to a moderate start but as the wheels get spinning, they don't slow down! Best known for his culture shock records Antichrist Superstar and Mechanical Animals, Manson has seen a steady decline in recent years that got turned around with The Pale Emperor, a change of pace, an introspective artistic piece that turned his observational musing inwards. I was sorely disappointed at first, "Heaven Upside Down" was not continuing in that direction but with each passing listen it grew on me substantially. He may be approaching his 50s but the fire for his breed of intelligent rebellion still burns bright in this fellow.

The most obvious comparison for this change of pace is the Antichrist Superstar era. The vibes, instrumental aesthetics and attitude is similar in many spots with a helping dose of anger and aggression. His poetry is witty, sharp as a blade with cutting lines like the opening "fuck or fight" on "Jesus Crisis". I could make lists but this is Manson, his reputation needs no examples, hes on his best game here with cracking lyrics that turn in on themselves as the words unfold. His ability to write and deliver hooks elevates the instrumentals as you'd expect them to do but always catches you off guard.

Instrumentally things start off aggressive with crunching guitars leading the songs. Dirty, Industrial thumping riffs on steady repeat. "Tattooed In Reverse" experiments with gritty, buzzing baselines and sharp, often shrill oscillating synths for a rattle house of dystopian blues. "Saturnalia" Is the turning point, the music becomes expansive with echoes of The Pale Emperor distance the aggression for spaces to breath in as the moods start to flow. Its as the album winds down from its aggressive start that I find myself captivated, Manson's chemistry with his band mates seems to electrify as his performance resonates with lyrics carrying the burden of dramatic emotions.

This albums flow is a strength played to. It starts with a bang to lure you in and steadily evolves into a much deeper record. The density of the instrumentals, aided by rich electronics, plays to the versatility Industrial music can provide as the songs collectively share a space with quite a variety of textures and flavor to throw your way. It can shred distortion guitars and find its way to bustling acoustics too without loosing the heretic energy. Everything comes together on this record, the group are on fire and give us the all killer no filler treatment. I will leave this post with a favorite lyric I can't get out my head. "And I tried to look inside you, but ended up, looking through you, now you try to tell me, your not a ghost!".