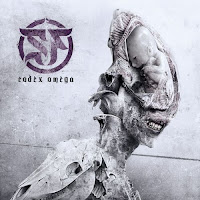 Greek veterans Septic Flesh have been at it since the early nineties and "Code Omega" is their tenth full length release and what a fine record it is! Being relatively unfamiliar with the band I don't know a lot about them bar an obscure EP I happen to really like. They play atmospheric and symphonic Death Metal with touches of other extreme sounds identifiable in the constructs of their sound. The symphonic elements of this record are exceptionally fleshed out, mind the pun. It borders on orchestral as the rich tapestry of music compliments the already high fidelity Metal production.

The band generally arrange the strings and symphonies around the rhythm of thunderous drums that pound tribal grooves in tandem with the monstrous thickness of the distortion guitars. When they are stripped back the orchestration arises to fill the gap and in turn dials it down when the guitars take lead. This rather mechanical sounding approach works ever so well as the melodies, grooves composed compliment each other well and work towards the same overall theme and sense of atmosphere, allowing them to be inherently different and playing to the strengths of whats needed in the progression of the songs.

The majority of these songs unfold like epic battles, the sirens of war call out alongside the crushing onslaught of chugging guitars and battering blast beats. Singer Antoniou roars his deep growling guttural words like a battle cry. Climatic break outs and shifts in direction create a true sense of direction as they spark the imagination to what events are unfolding in this cinematic experience. Its not all brutality and bludgeoning, bursts of light creep in as breaks to melodic lead sections are graced by the capable and authentic clean vocals of guitarist Vayenas.

There is little to falter, fantastic, sublime production brings crisp and bright instruments together in an extreme setting. My only complaint would be the occasional lack of charm, "Faceless Queen" chugs out a monotone syncopated groove with an incessant jolting of strings. It makes its point, creating a state of immanent fear and danger but does so with blunt force and a few other moments like this felt like the craft slipped for a moment. Otherwise its a sturdy collection of songs with the acoustic guitar lead "Trinity" closing the album on a throwback to the "Eldest Cosmonaut" EP I am fond of. This is probably because its the only other record of theirs I know!