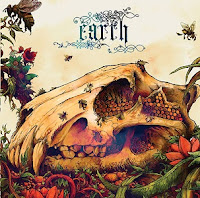 With the pandemic slowing the pace of new music by the artists I follow, I've noticed the freed time has had me picking out forgotten treasures. It is much fun to revisit old favorites and after blowing the dust of Hibernaculum we get to revive the one about the bees and the lion! I never got deep into this one upon release and the reason is swiftly apparent - Its all to similar. Earth's slow, drudging pace and methodical unraveling of suspended, elongated chords and melodies brews a warm atmosphere. Once familiar with the niche, it dissipates too a mood, one to be conjured but hardly encapsulated by.

With its axis a little more woven into the softly distorted guitars, texture and aesthetic ooze from the speakers as its melodies clime to unleash brooding chords that ring out in slow motion. In its simplicity, amalgamating layers of ambiguous hazy noise gush forth from its crashing power. Heard best in its opening songs, the charm wears off as future songs pivot more so to the piano as the lead instrument and in this relegates itself to a less imbued form.

Rise To Glory introduces a remarkably hazy guitar solo that ebbs and flows in its shoe-gazing presence, sluggish and reflexive, its grasp on tension and human expression is suddenly cut short as a sudden pivot ushers in the pianos phase. Hung From The Moon goes there again with the piano but its not quite the same. This additional layer, free from the grinding pace yet flowing with a complimenting looseness is wonderful, a stand out element that doesn't get much time to flourish. With this they had something but without, its all to similar and the record tends to drift to the background, where it sets a fine and soothing mood of calmness and ease. A good record but its clear now why it didn't stick with me back then.