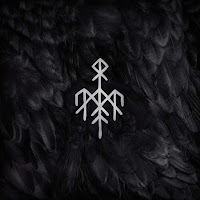 These Norwegian musicians have been reviving their heritage for years now, utilizing historical instruments to ignite the flames of their viking ancestry. The last outing, Skald, was a performance piece of sorts, poetical recitals and minimalist accompaniment that failed to spark excitement with this listener. Kvitravn is a return to norms yielding a similar problem as its now established and familiar aesthetic passes without a gust of anything to break its gloomy droning march. Don't get me wrong, what these musicians achieve is beautiful and visionary but as there persona becomes expectant, groups like Heilung thrill with their claws lurching into the shadows and pulling out blinding horrors of ancient darkness.

Kvitravn plays with the same drudging pace. A weighty gloomy hangs overhead as the cold winds and constant rain batters its human inhabitants. Peering into a re-imagined past, Wardruna captures the spirit of burdensome life, one of hard work and death with a spiritual closeness to mother nature. Its songs tend to find different ways to this same macabre march of dragging heels and achy backs as its thick drone of flawed and aged instruments is led by the reluctant pattering percussion of bearskin drums, pulling the music along. Once established song meanders in its particular arrangement, circling the same rhythm and musical ideas over and over again.

Its on inspection that its repetitious nature becomes obvious. Trying to gleam out moments or details that sparkle, perhaps only the haunting choral cries of Viseveiding stand out. Without such critical ears it is all to easy to fall into its spell, the dull drones of blunted instruments become the curtaining atmosphere to bring about a subdued meditative state. In its mild gloom many moments feel ephemeral as its range of cultural voices sing Nordic tales, hardships and occasionally dive into the hysteria of softly guttural chants. The human voice is the element that ties the music together but as already expressed it is the puritanical approach that gives it little leverage over their previous output. For now I will put this record down and whenever in need of that nostalgic viking majesty, I may resurrect it for the dusky tone it conjures.