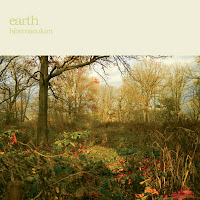 Here lies a blast from the past, one of my first steps into the worlds of Drone and Doom. Earth are known as pioneers in the field and Hibernaculum comes in the second leg of the duo's carrier after reformation a few years prior. To me this four track EP was a hypnotic exercise in simplicity and repetition that pushed its gradual shifts in tone and texture as the progressive archetype. Its entrancing mood was one I'd enjoy on many long walks home in the dark, I couldn't however convince my friends of its magic but with it passing my mind again recently, I have revived its wonder to my playlist to share with all of you through this music blog.

With the aged ears acquired since, I hear the likes of Noir Jazz as a distant cousin to this breezy, soft and natural record. Steeped in a neutral tone it feels rather adaptable to either the city night or natural beauty in the light of day. Its first three songs deliver gorgeous metallic acoustic guitar melodies. Drawn out at a snails pace its repetitious ideas are underpinned by chilling piano notes and the bellowing dense blanket of bass. Slow and methodical its incremental growth blossoms so slowly its like watching a face age day by day yet in the calming spell of its manor, an intensity manifests with its lurching distortion and subtle organs chiming in on the craft.

Its final song, clocking in at over sixteen minutes takes the temporal to its conclusion. The soft percussion performance of Adrienne Davies is drawn to a crawl as the textures of her cymbal strikes cry out in the void between lingering notes from a darkly guitar. A Plague Of Angels plunges into the chill of night where its counterparts exerted a sense of natural beauty, this one slides into the shadows, devoid of light yet still having this calming persuasion. Being able to hold the listener in its grasps, the gradual rise of blunt over-driven chords takes us into dramatic spaces as it grows bolder. It could be excellence in action, or possibly the countless hours of bonding that made it so vivid to me.

I've written on Earth's more recent Primitive And Deadly, back when I first started this blog. Its a different beast, more metallic and doomly with charming vocals and all. That was one of my personal favorites from 2014. This fun revival of an old gem has made me realize how little of their discography I have uncovered, perhaps one to dive into now! Hibernaculum is a fine record, solemnly neutral with a slight chill in its backbone, the temporal pace and sluggish unraveling is a power of its own! One to always return to from time to time.