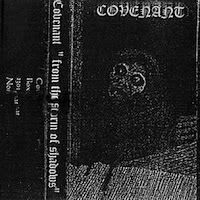 With SETI, Animatronic & Nexus Polaris behind us, we venture now into the less impressive origin of a remarkable band. In the past I barely bothered with demo tapes, my recent foray with My Angel gave me a nudge to give this one a try. I'm glad I did, although far from impressed with a now cliched sound I know inside out, it was a pleasure to digest these three darkly, menacing tracks of scene cast Black Metal.

Sadly the symphonic element starts off mostly absent, possibly too enveloped by the smothering bass to stand apart with distinction. Its not until two thirds through the opening track that we hear some lone horns roaring in triumph from behind the grisly guitars. Its presence grows and by the third title track we get some medieval, partly jovial synth lines chiming in to the shadowy aggression with bold melody.

As far as the crass audio quality goes, this is a studio demo, harsh in the upper mid range but doing a great job of making its instruments heard. The key elements of the music get through, those brooding, mid tempo riffs with darkly accents, atypical of the times. It plunders away through blast beats and howling, unattractive scowls that rasp over top from Nagash who handles everything but the guitars here.

Its rather hard for these three songs to make much of a lasting impression given my already extensive exploration of Symphonic Black Metal. I'm fairly sure these songs would of carved some adoration if I'd turned to them in my youth. As it goes I skipped over them but its clear that Nagash of early Dimmu Borgir notoriety was a competent musician adding his own take on the emerging sound with vision and spirit!