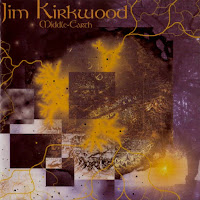 The resurfacing formation of Dungeon Synth in the late naughties has been quite the spectacle to watch unfold. With its roots in obscurities linked to Black Metal and Avant-garde music from the nineties, this sound found its name and niche, flourishing with both creativity and a bustle of low effort clones. Doing research into the genre's origins, records like Depressive Silence, Medival Journeys and Midnight Fullmoon crossed my path, all providing fun and curious listening experiences but deeper than them all is Jim Kirkwood's mighty double LP spanning five lengthy musical adventures. Released at the turn of the decade, this sound is untainted by the unleashing of Scandinavian darkness yet to come. The common ancestry that shares a thread here is J.R.R. Tolkien's fantasy world of Middle-Earth, a common influence in Black Metal and Dungeon Synth, of which this work is neither.

Kirkwood's music is typically described as fantasy music. Hinged on the electronic scene aesthetics of decades past by, the use of bold visual tones from Casio synths and Morg synthesizers has that timely gratification bestowed by the power of melody. With a little imagination, one can be led by the unsubtle arrangements on fruitful adventures. His style seems obvious at first, curious melodies dance in tandem, exchanging shifts in pace and tone to conjure the sense of spectacle as the scenes unfold. Cheesy might a cruel word to reach for but in his boldness Jim composes with cinematic scale to outpace any of the era sentiments that may arise.

Its mammoth two hours do not drag. The show sways from the beauty and glory of fantasy realms to the darker perils exemplified on Urak Hai, Tolkien's demonic warrior beasts. Between typical song structures he gets creative within aesthetic limitations, mimicking environmental sounds like winds, horses, birds and the thundering echos of deep drums. Percussion is used to steer in some momentum at times and in others acts as an abrasive tool to warn of danger. With that cinematic sense of vision and direction fueling it, these clashes with potential dated ideas retain their charm. Best of all an underpinning of swirling synth arrangements akin to Tangerine Dream constantly push the melodies into lengthy tangents with a psychedelic driving them along. This is a fitting idea that recently sparked my interest with Old Sorcery. So curious to find it at work here over twenty odd years earlier.

There is so much that could be said of the adventure unraveling over these two hours. I do think Jim takes liberty with scale and repetition at times but it mostly adds the the epic Middle-Earth scale it reaches for. Its been a wonderful listening experience with many uses of melody and aesthetic I'd hear resurface in Symphonic Black Metal and other electronic related genres in years to come. I also hear a soft link to Progressive Rock and Jazz Fusion over a few instances of keyboard playing, even a guitar lick dropping in on King Of The Golden Hall. The links go both ways! This one is really worth your time if you have anything invested in Fantasy, Tolkein or Dungeon Synth. This is undoubtedly a hidden gem with little information on it beyond the music, I would love to know more about its creation and inspiration, although the latter is obvious.