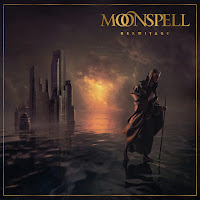 Imagine my excitement, the triumphant roar of Jumalten Aika still gnawing at the back of my mind, a new Moonsorrow record on the horizon, I was buzzing! I jumped at this album when my aggregator informed me of its release. A slight problem however, the service confused the two moons and so I have brought this twelfth release from Portuguese Moonspell. To rub salt in the wound, this same confusion actually transpired a couple years back. I really need to fix my subscription list...

Unlike 1755, Hermitage has been a fumble to engage with. Its bland foray of lightly tinged Doom and Gothic Metal tonality is often steered in a Progressive Rock direction, attempting to revive ideas of the greats and rarely amounting to much in the progress. Singer Ribeiro is often off-key, a constant thorn in the sides, hurtling his rough manly shouts, he rubs against the melodic cohesion off his band mates.

The instrumentals behind him are decent at times but the music tends to meander. Swells of metallic aggression that brood are often weak and loose on arrival, at least within this brittle production which fails in giving oomph and power to its instruments. Songs slowly ponder through many quiet and meager passageways. Its calming and composed but lacking much in the way of excitement. When those big guitars erupt, the momentum is often left hinging on an unappealing distortion aesthetic.

The occasional inclusion of classic psychedelic synth sounds spark some curiosity but tend to add their own appeal as opposed to gelling with the rest of the music. All in all its a hard record to compliment that offers no reason to come back. Besides my gripe with the vocals, nothing is particularly tragic or offensive, just unreasonably mediocre and drab. Anyway I have learned my lesson, removing this band from my list at once!