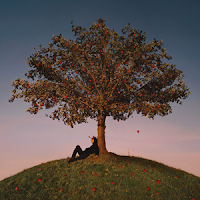 Following up on his remarkable debut Nothing Great About Britain, the Northampton based Slowthai returns with an album of two halves. Separating the gritty attitude and boisterous swagger from his substantive social commentaries, TYRON splits these fourteen new tracks. Stylized with capital letters, the first seven are slamming bass led club bangers to blow your socks off. The remaining songs, presented with lower case names, drift into an emotional journey with subdued melancholic Jazz Hop vibes as Slowthai gets serious. Play With Fire acts as the transition track between these two dramatically different tones. His last recorded melded these elements wonderfully. Separated, they are simply that, it feels like two short albums.
Its first halve is easy to love. Coming out the box wild and barking, Slowthai sparks off sharp at witty rhymes with a feisty attitude to play of the raging bass which has been rumbling my room sweetly on my new Yamaha monitors. The production is sublime, tight, crisp, snappy percussion leaves a sweet space for the sub bass tones to pump away obnoxiously. It comes into its own when reuniting with Skepta for an instant classic instrumental with Cancelled. Focusing on boisterous raps and fiery flows, Slowthai's creativity runs away with plenty of clever word play and references. Its fun and engaging but far from the emotional journey about to unravel.
As the topicality shifts so do the instrumentals, steering away from bumptious bass and bringing colorful, moody samples to light. A notable inclusion of pitched up voices, prominent on Nhs and the acoustic guitars of Push give me serious Brockhampton vibes. A handful of these tunes tend to reflect a Pop adjacent space some Hip Hop sounds have been exploring as of late. In these songs Slowthai's flows feel at the mercy of his narratives as he slumps into a spoken word pacing, leaving much of the teeth and snark that makes him jump off the track behind. Equally though, the stories, musing and commentaries have their potency with heart felt verses.
Ultimately Ive landed on this feeling that his magic as an artist is in the space between this deliberate separation. When his grin soaked rapping is bouncing off the walls of that gritty attitude, the potency of his emotive remarks and political points have punch. His flow doesn't suite the vulnerable instrumentals that try to lean into that aspect of his lyrics. The first half ends up triumphant here as the less serious side is fun and well executed. Although loaded with a lot of heart felt expressions, its second instance just doesn't have the power to grab and lock in the same way. The approach may have not been the best here but Slowthai is clearly still one to keep a close eye on.
Rating: 7/10
Email ThisBlogThis!Share to TwitterShare to FacebookShare to Pinterest
Labels: 2021, 7/10, England, Hip Hop, Rap, Slowthai, Trap
Newer Post Older Post Home