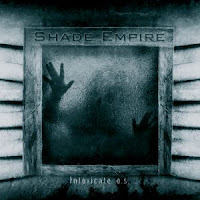 One step forward and two back, Shade Empire's sophomore effort seemingly faces issues both musical and aesthetic. The strange synth loudness production of Sinthetic highlighted a hidden strength but on this effort it is overwhelmed by grating metallic aggression made harsh by its ear grating production. Its opening track Slitwrist Ecstasy sets off alarm bells as the howling rattle of a loose snare overpowers everything around it. Creeks of spectral keys struggle to glimmer between the rumbling rattle of percussion and the snaky guitar tone that sucks up all space beneath it. The balance is poor, the ears do adjust with familiarity and repetition but the albums biggest strength has been cast to the shadows, a reverse of what came before it. The synths are now all to quiet to have the impact they deserve.

With vocalist Harju wrenching out his meaty shouts and counterpart snarling whispers in the front line, the aggressive context dominates as the drums barrage track after track. Its an unsurprising affair of riff arrangements and drum patterns that pale on their lonesome. In some moments where the pace cools off, one can hear the web of synths woven in too forge a powerful sense of atmosphere and direction for the music. The issue is production, they are simply mixed in poorly and the thick slab of unappealing guitar distortion washes its power away. Its truly disappointing as one can hear the intention but is simply unable to indulge. The only occasions they come to the forefront are with the big cheesy synth tones... everything is out of balance.

Every spin has been an endurance test, how quickly will that unending snare drum take to ware my interest out? Well prior to the albums close Ravine, an entirely synth led composition, gets to shine in the wake of a slowed drum groove and lack of guitars in its opening. Even still its a gem in the rough, one can hear the dirty buzzing baseline in its opening, a reminder of how ugly this aesthetic is. Through that the piano melody and soft synths forge a nightly mystique to show that talent is present, if not held mercy to the bad sound design. Intoxicate is a very forgettable record, one I wont wish to return to, however if handled differently in the studio, my opinion and enjoyment could of been entirely different.