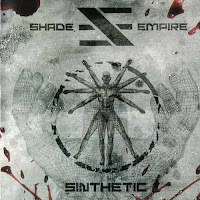 Having recently recorded my blog post on Arcane Omega for my music channel, I was prompted to explore the Finnish bands back catalog and thus landed here at their debut. Initially I writ it off as being a run of the mill record, however with each spin the melodies and symphonic themes rooted themselves, revealing a slice of fantastic songwriting here at the origin of their adventures. Sinthetic is not without flaws but certainly a stronger set of songs that you would initially suspect in their infancy.

As a Symphonic Extreme Metal album, its texture, tone and temperament exudes much of what Dimmu Borgir unleashed with Puritanical Euphoric Misanthropia a couple years beforehand. What Shade Empire bring to the table is an Electronic element tangled between its harsh metallic drive and swoons of symphonic might. The best of the record comes from the gleams of melody its orchestral tones usher in over the industrious workings of synth LFO's bustling away around its metallic template. Its design very much of the electronic scene, working its way in with an Industrial vibe.

Its quite the stark construct, the guitars feel distance with a narrow scratchy, plastic tone. The rapid drums rattle their way around with a lot of intensity. The bass guitar and low end is thinned out, the electronic osculations fire off with distance too. Harju's harsh, flat screams are too without depth, adding to this brittle production style. Its the symphonic keys, choral vocals and pianos that swarm the music with a warmness. Dense in tone and presence, they dominate the music on arrival.

These elements essentially carry the record which unfortunately pivots quite often to the drive of Metal techniques and arrangements that tend to have little dazzle. Its at its best when the keys take over, delivering theme, melody and might that swoons and takes off like a rocket. Its a mix of contrasts that works when smothered with synth and in doing so gives it an edge over what you might expect from this musical niche.

That echo's my opening statement, initially I thought it to be a typical record but in hearing the persuasion of Savolainen's arrangements blossom, it reveals a fractional magic. The reality is whenever the music hinges on its metallic footing its a rather dull affair. Its eight songs have their moments and when they do, its always the swirls of electronic synthesizer or orchestral gleam that births its magic. A peculiar record, one that indicates their symphonic genius was there from day one.