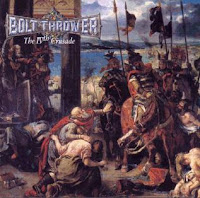 I may have said I was done with this journey for now but one curious listen alone had me thinking this was hands down the best Bolt Thrower had to offer. If War Master, their previous effort, was a pivotal moment of evolution for the bands sound, then this is the mastery of that transformation. Dispensing off with the Grindcore hangovers of frantic guitar noise and plunges into manic blast beats, the band shed the scars of their youthful music and lean full tilt into their championed formula of dense low end grooves that croon against frequent rises of catchy leads. Pairing power and might with satisfying swigs of mean melody, the endless sways are endlessly enjoyable.
Despite being fully accustomed to this mid-tempo Death-Doom temperament, these songs seemed to hit the hardest of all and with a little more pace than usual. With a crushing resilience, the production brings about a dense, feisty tone that carries the relentless percussive pummeling so well. Track after track hammers away with intense, pounding drums rattling off a heavy framework for the thick, meaty distortion guitars to grind out an arsenal of riffs that carry well. These songs are simpler, to the point and with a refined execution the head banging is ceaseless!
Many of the common tricks are turned here, the timely breaking of intense drum patterns to half times on the ride or hi-hat symbol are in frequent circulation. The guitars offer up balance with the constant swaying on the ranges of the fretboard. Above it all Willets gives another mighty performance with his steady barking of guttural growls as mean and gritty as ever. Despite being a familiar experience, the excitement sustains as the sharpest ideas are delivered stunningly. Within the Death Metal context, the angle of war and the suffering it causes delivers a tempered beast of crushing might and majesty that's somehow unlike anything adjacent to them.
Embers stands out for sharing the same recurring riff as Powder Burns and Cenotaph but taking the biscuit is closer track Through The Ages where the band offered up a little novelty to their sound. Light choral synths back one of their broodiest riffs in the closing phase after a spoken word narrative listing of a long history of wars throughout human history. It ties itself to the thematic concept of the record seen in title, album art and lyrics. Just by stepping aside with an alternate idea they create a truly memorable song as the dates listed reinforce the magnitude of human created suffering by war, only then to be shadowed by this swell of musical might. Its powerful.
At some point I will probably get around to the missing Bolt Thrower records I am yet to unearth. My entire time with the music I was trying to figure out where they fit into Death Metal's legacy. Thinking of other pivotal records in 92 like Clandestine and, Tomb Of The Mutilated this was certainly not at the forefront of the musics evolution but right at its peak they came through with a matured sound that didn't hinge on gimmicks as subsequently can be appreciated well through a historical lens. If I've not made it clear, this is thee Bolt Thrower album to check out! A brilliant moment in time.
Rating: 8/10
Email ThisBlogThis!Share to TwitterShare to FacebookShare to Pinterest
Labels: 1992, 8/10, Bolt Thrower, Death Metal, Doom Metal, England
Newer Post Older Post Home