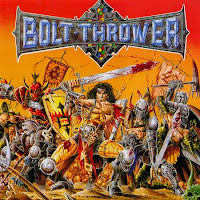 This is it! The pivot I was listening out for, a moment of change but one that surprisingly comes as a full on swing. With a touch of Doom Metal restraint, the band find the steady footing for their brutality to march hard at mid tempo, with powerful grooves thrusting its momentum forth with the energy I enjoy. Bolt Thrower still strike me as a band in identity crisis. Yet to land on the appropriate theme of war, their Warhammer inspired image and tacky name seemed at odds with the early Death Metal sound. These are all details that don't really matter if the music is good.

In War Master lies a big step forward in fidelity and song writing. The rhythm guitar finally finds its tempered aggression that defines later records. This aforementioned pivot is massive but not without the blemishes of their previous efforts. It actually adds a little flair as wild plunges into loose blast beats and the hangover of Grindcore guitar noise give it brief tangents to break the tone. Otherwise all the pieces are in place. Big and powerful power chord arrangements routinely switch into tremolo picking as lively drum patterns pick up pace, delivering that heavy sway of grooving aggression.

Best of all, Karl Willets's voice opens way up. This could have been aided by the decent fidelity of this record. His breathy, throaty guttural growls are very audible for this seasoned listener. I found myself catching many of his doom and gloom lyrics, expressing disgust and commanding punishment and persecution for the human race. Its all light heart stuff! He rides the music like that extra layer of noise but the amount of texture and grit is endearing. Its not often a vocal performance catches my ear.

All being said, my excitement is steered heavily by finding this "linking" moment where the band stumbled into their own brilliance. That being said, it sounds like a total switch up to my ears with only the occasional blast beats and eruptions of lead guitar noise having much of a link to what they did on Realm Of Chaos. I'd be curious to learn what the band themselves thought of this evolution. With only two other records to digest, I think I'll put this one on ice again for now.