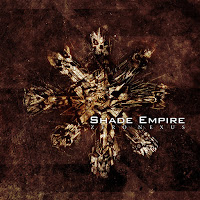 Released five years before their almighty Arcane Omega, Zero Nexus is another fumbling block on a patchy path of production hell that seems to drop the ball for the same reasons once again. Putting forth its extreme elements in imbalance, it is the snarling snout of Harju that groans its guttural filth loudly with a textured harshness to drown out the quite and underwhelmed synths. The distortion guitars too have subtlety drained as the details of its fretwork get lost under the mechanical rattle of pounding drums.

Its musical ideas are lost in the muddy wash of sound that pivots on a lot of Industrial grooves. Interchanged rhythmic pummeling drives on harshly as the strike of snares and kick drums flood the music with aggression. Attentive ears can pick out the pianos, strings and electronic tones dispersed between, all blemished by a lack of power and presence. Even direct focus doesn't let the chemistry elevate but it does yield a certain curiosity about them. When the music parts from its charging instruments, often with a percussive break beat of sorts, even then does seem tamed.

Its worst element are the vocals which could really do with being toned down behind other sounds. The range of gutturals displayed tend to lack power and potency, instead hinging on a throaty roughness, especially dialing up the cringe on its halfway clean attempts. Its god awful and a constant distraction from interesting song structures and arrangements that take place in the ebb and flows. Of the handful of spins I've given this I just can't get past its awful production, so disappointing.