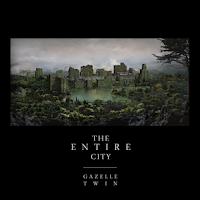 Rolling back the clock a decade, here we have an inspired album that has had me assessing parts of the musical landscape I have grown to adore with Its place curiously poised between styles and artists. Debut record of musician Elizabeth Bernholz, who handles all to be heard, The Entire City is a curious record with echos of many threads, most notably the soothing yet esoteric electronic works of Fever Ray who has a not too dissimilar temperament from the obscurities at play here. They too toy with the unusual and spin its oddities into frame, becoming whole songs.

Elizabeth sings from an easy place, led with breath and softness, twisted by layered, pitch shifted vocal manipulations that bring her emotion to the center with an alien inflection. The instrumentals behind her are fantastic yet she dominates the focus with a performance reminiscent of fellow Brit FKA Twigs. Other heritages are present, the percussive arrangements echo tones of Industrial and electronic Glitch music in moments. Most notably in the opening track and recurring surges, a nostalgic sense of Neoclassical akin to Dead Can Dance can be felt driving the records arching theme.

In some ways its a typical Art Pop record, toying with the avant-garde and obscure, pining them on simple principles of enjoyment. Yet throughout, the songs flow from relative comfort to arrangements that pull and stretch at its fundamentals, dabbling in minimalism as the stark and bare of this sound is explored. In its more developed phases, simple percussive drives foster an array of quiet and meager synth tones that shyly dance in tandem with surges of synthetic bass wobbling beneath.

All in all the album has been more pleasurable with every listen. Its odd and alien aesthetic reveals a beating human heart beneath as its strangeness grows kind and familiar. Initially dark and shadowy, a warmth resonates yet most of that feels explored early on as its mid section pulls through some sluggish deconstructions. The shrill rising terror of View Of A Mountain reminds me of Nobuo Uematsu's more sinister songs from the Final Fantasy 7 soundtrack. Followed by the lone voice of Abandon it seems a strange bow out but again catches my ear for links that seem to be all over this record. One thing is for sure, I like it and will enjoy returning here from time to time.