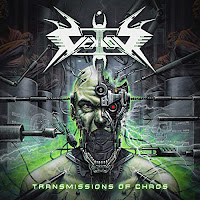 It's been some time since I last heard anything from American thrashers Vektor. Their previous effort Terminal Redux was quite the charmer given its dense and technical take on Thrash Metal, a great work of vision and execution. It was also the bands last, I was unaware they had disbanded and this two track warm up is a result of their recent reunion. Sadly though the two tracks didn't carry the sparkle I heard before.

Activate is a fast ripping thrasher of choppy techniques and dizzying melodic entanglement, charging head first into the wall! Its tone and jittery energy is unrelenting, not offering much in the way of a hook or catch. Its pause for an acoustic respite after blazing solos is an interesting moment but the track tends to contain itself as a short, simple drive of aggression, not looking to get expansive as they once did.

Dead By Dawn initially sounds like a cover with its clean vocals springing a different mood forth. Its a progressive path forward, opening up at the three minute mark into beefy lunges of melodic gleam and meaty distortion fretwork. Its sudden pivot to rapid power chord shredding dispels the excitement. It reuses the lunging moment to see the song out and ultimately ends up feeling a bit directionless.

For a band reuniting, this may just be an exercise in getting back into the process. These two numbers show both craft and execution, bringing back their very "plastic" and particular tone with a competent production but disappoint with a lack of dazzle or remark within the routine of galloping Thrash Metal running the routines of its techniques. The second track had the ambition with a bold move vocally but its conclusion was to fall back into the arms of comfort. Transmissions Of Chaos is worth a listen but hopefully they will bring bigger ideas to any full release in the future.