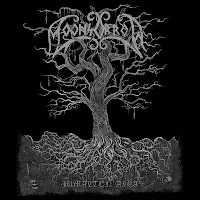 Who are Moonsorrow? A Finnish band from the counties capital Helsinki who define themselves as "Heathen Metal" in an attempt to distinguish their inspirations from the Viking and Pagan forms of Metal they sound alike to. Ive seen the groups logo on shirts, jean jackets and festival bills but the name never drew me in to find out who they were. Its a shame I didn't listen sooner because they are my absolute cup of tea in an area of music I never get tired of. The band tread the lines with Black Metal through shrill vocals, sharp aggressive guitar riffs and its Heathen counterpart with Symphonic walls of melodic density and its core theme.

Consisting of four lengthy tracks and the shorter seven minute single "Jumalten Aika" it is immersive in the fullest sense, deep songs in a wall of sound with pacey progressions that keep you locked into a heathen world inspired by natural beauty. The belly of the beast are the bellowing baselines and drums hammering away in a muddy production that has the distortion guitars and symphonies bleeding over the two, never loosing focus on the musics direction. In the distance shrill screams and crys call out with a less than human touch for what is primarily an ancient human experience of epic pagan wonder. The songs start out steady, ever building towards climatic moments that have the strength and surge to carry on for minutes in the gleam of their triumphant melodies played on the keys. Even in the opening stages of "Ruttolehto" do warlike horns set the stakes high with a style similar to Graveland's classic "Prawo Stali". It shifts at the arrival of archaic group chants and around the six minute mark they re-emerge as choral chants with a stunning harmony before the song gives way to a flute like native instrument with such charm and authenticity, it grows to epic heights as the choral chants grow in magnitude and when the "heavy", the distortion comes back in it has its moment before winding down with a vivid soundscape of acoustics, native folk instruments and chants.

The album and its songs develop in similar ways with all sorts of flutes, horns and strings becoming essential parts of a songs direction while they drop in and out between the Black, their scale unchained by expectation and ripe with inspired melodies to wisk you up into their heathen world. The production plays an important role as it would do in any record. On paper it may seem a little to muddy and dense for charm with the clarity of the drums always under pressure from the oozing walls of synth working their around the grizzly treble heavy guitar tone. Symbols burst out of the background with a clatter and it all works so well for a theme that requires a little grit and authenticity.

The heights of epic this record soars with is remarkable. It reminds me of many of moments, records and songs that are reminiscent of Moonsorrow's take on Black Metal, however the band have homed in on a vision and created a record of true inspiration. Its a reminder of musics progression and although these extreme genres of metal may of passed two decades in age, their is still much maturity and understanding in its craft to be explored and this band are doing just that. Whats best about the record as a whole is a lack of a single crowning moment. Each song has you in its grasp, maybe you know what comes next but by the time it passes and you've reached the end you can't wait to start it over again.