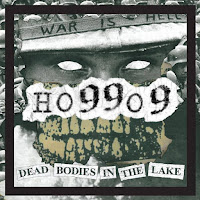 Horror, stylized Ho99o9, are an American Hip Hop duo from Los Angeles who perform a noisy and twisted, dark breed of Hip Hop influenced by Hardcore Punk and Horrorcore. Its most likely that people will draw comparisons with Death Grips as a influence when discussing this band, however this mixtape would suggest that despite their abrasive and noisy approaches to Hip Hop they are fundamentally different in terms of inspiration and attitude. I caught them at Download Festival and the fifteen minutes of their set blew me away, so much rebellious energy and stage presence. Their most impressive song was "DeathKult Disciplines" which can be found on this record so that's where I decided to start.

"Dead Bodies In The Lake" sets the tone with an audio clip from a movie of young kids discussing guns and a dead body they found. From there it grows with dissonant bass synths and outbursts of Hardcore guitars into a Punk sprawl of smashing crash symbols and restless shouted vocals throwing words like raps while remaining firmly Hardcore. After two tracks a gurgling baseline and sinister synth line pull together with a hollow beat to form the foundations of a hellish, paranoid Rap song. Its lead melody paranoid and deranged, taking a trip into a psychotic mind.

The record flexes between these two styles, in one half its wild, energetic and full of loud rebellion fit for mosh pits and hardcore dancing. On the other it dives into horrid, dingy, back alley raps spite with psychotic personas. The duo have a charm for hooks when slamming along to the distortion guitars which are often grooving, the accommodating arsenal of rambunctious drumming and frittering electronic noises amplify their wild tone with an infectious stir. The twos flows when performing more traditional raps aren't exactly spectacular and the extent of their horror shock lyrics doesn't save the Rap side of the record from feeling dull and played out. They have a full length on the way, I hope they steer the ship towards the better half of their sound which has a unique flair and bright chemistry great for live shows.