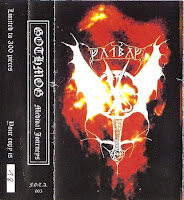 Continuing our exploration of the dark and dingy Dungeon Synth realms, I found this solo record by Ral, one half of the German Depressive Silence duo. Working under the moniker Gothmog, an Orcish creature from the JRR Tolkien realm, Ral brings us this cassette release limited to 300 copies, that makes a firm shift in direction from previous ambitions. Its cheep and cheesy Casio synth tones are a fond reminder of Lord Lovidicus's Trolldom but despite the Lord Of The Rings inspired name there are no hints of this being an early example of Tolkien inspired Dungeon Synth.

It does however have all the hallmarks of that classic sound. Bold, punchy and dated synth tones work their charm through the mysterious nostalgia of low fidelity recordings harboring a stream of fantasy melodies. The music often drifts into calmer settings as it gets going with bells and flutes sprinkling some charm over otherwise gloomy organs than dominate the undertone, giving it some pull to the dark side but mostly Medival Journeys is humble, pleasant at times dreamy and mysterious... And yes it is misspelled!

The varying quality of the tracks makes for an interesting listen, the atmosphere doesn't shift to far but its fidelity sways when bright acoustic pianos punch in fiery chords and choppy melodies over energetic string sections, it can get a touch blurry. With frequent progressions and shifts in the pallet of instruments the music is continually engaging and its final proper track Night Passion includes some rather plastic, vibrant Synthpop tones to great effect, alluring to the Depressive Silence style.

The inclusion of a bonus track before the outro is a poor decision. Its opening notes don't prepare you for the dirty, gritty and completely muddy snarls that are about to drop in. After a few minutes the already weak song starts to mess around with a very peculiar phased distortion sound that buries what sounds like gothic chants. It grows in presence and starts to sound like a guitar but more so a wreckage as more ugly, filthy screams groan in dissonance. Its a poorly executed song that butchers the balance of fidelity and sours the ending of an otherwise solid listening experience... The outro track, just a minute long is fantastic tho.