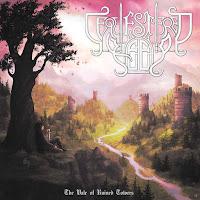 Continuing our dive into the mysterious, adventurous realms of Dungeon Synth we come across this praised release by an artist I was already familiar with. I have many of the previous records from the American composer known as Sequestered Keep, because they were free and plentiful. In a span of a few months they released a dozen albums onto bandcamp, all with a striking monochromatic covers of mythic castles, epic landscapes and darkly forests. Unfortunately I wrote the music off as being far to minimal and effortless, I got the impression it was more about the fantasy of Dungeon Synth than the music itself, minimal because it was put together hastily.

If that is true or not there is no doubting this new logo and introduction of color in the album art signifies a shift in quality. The majesty unfolds with a gleam of medieval fantasy and mystic imagination not far from the kin of Fief. With bright melodies reflecting playful adventures and carefree mischief The Vale Of Ruined Towers paints a rather warm and serine setting within the so often gloomy and decrepit micro genre. Playing into the fantasy side of its sound, a welcoming tone invites the listener in to stay in this carefree realm.

The aesthetics take on a bright, pronounced and glossy sound as luminous instruments in the form of harps, bells, horns and choral synths chime in tandem through compositions of layered melodies which often stack up to several layers, creating a colorful web of sound. Its held together by a constant but easily overlooked percussive line of steady hi hats and the meek shaking of a quiet tambourine without a kick or snare in sight to enforce any groove beyond keeping tempo. Its result is a colorful vision of glory from mystic realms of surreal natural beauty where kings and queens bestow their lands.

With a fairly consistent tone its scope may sound a little narrow as its song structures and musical progressions rarely break the mood and atmosphere of the instruments. It gives the whole album a stagnancy within a beautiful setting. When instruments fade, melodies shift and songs turn direction its as if it goes around in a circle. The record sets a fine tone and atmosphere for the specific mood but on closer inspection feels like it has the power to grow and expand yet the songs remain firmly in the same spot. A great record in some regards yet being familiar with this style It feels like the opertunity as passed to push it further.