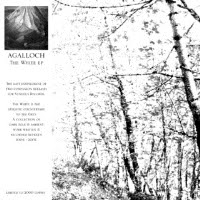 Browsing through my archives I stumbled into and old gem, a lost treasure, something that must be shared for its intrinsic beauty and deeply spiritual sound. Agalloch are a highly praised American Black and Folk Metal band who released this record between a string of noisier counterparts. Not being that familiar with anything else in their discography I remember it as a u-turn to the roots of their Folk influences, a tribal, pagan ethereal experience that places one at the heart of nature.

The record establishes its Pagan theme immediately opening with a sample of children chanting "We carry death out of the village" from the movie "The Wicker Man" about a Pagan community on an isolated island. Its followed by bright, infectious acoustic guitars, vivid and clean they swoon simple melodies and chords with a Folk charm. It reminds me of the acoustic moments present in Metallica's "Battery" and "To Live Is To Die", a similar tone but a loud and strongly plucked playing style.

Aside the core instrument, the guitar, there is a imaginative variety of sounds that give each track its own dimension, "Birch Black" has swirling synths falling from the sky, a crunchy theatrical baseline signaling the tribal drums that pound the way for a tremolo plucked lead to crash into and narrate the song from a soaring height. "Hollow Stone" plays with brooding ethereal noises that sound like soft winds with distant voices in a choir, morning a lost beauty. It paints a picture of great loss in the cold foggy moors of the countryside as night is setting in. "Sowilo Rune" has a warm, adventurous but tamed piano playing of a soothing chemistry between the ethereal synth and strummed guitar chords. Whispering voices and a deep base moog give it a touch of mystery and mysticism while remaining an upbeat and positive song.

The final song ends where it all started, with a sample from "The Wicker Man" and often it is my cue to return to track one and enjoy it all over again. Its a record of substance and inspiration, one could of wished for more but of the thirty two minutes, not one moment is wasted. Its a mesmerizing, spiritual record, isolated in a bands discography, unlikely to be returned to again. Either way its a treasure I've enjoyed countless times and will continue to as time races on-wards.