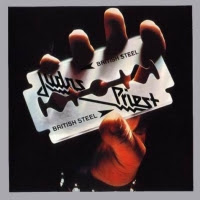 Pounding the world, like a battering ram! British Steel is English Heavy Metal band Judas Priest's sixth album released at the beginning of a new decade for the band, the 80s, and would be their most definitive and celebrated record. Having pioneered a heavier, unique and charismatic style in the 70s with records like "Killing Machine" it was this record that it all came together to produce an anthemic collection of songs that paraded the hard metal and leather niche of Heavy Metal they had created for themselves. I was lucky enough to have found this record at a young age around fifteen years ago and time and time again its been a go to record for getting the adrenaline pumping with Heavy Metal fever.

Singer Rob Halford's unrivaled vocal range leads the charge with a commanding and fearless attitude through a forceful strength in his voice which despite being relativity smooth and audible has the grit and clout to enhance the bands heavy attitude. Alongside him the guitars blaze a trail like the sirens of Heavy Metal, assaulting the listener with crisp, metallic tones, dynamic and powerful as they combine a sense of melody and rhythm together in a power chord led offensive of endless tunes to hum along to. The bass takes a tamer roll, often mirroring the guitars but sounding solid and bold. The drums have a mighty tone, a rounded, cutting snare and a thudding bass kick that arrives in the higher ranges gets a workout with double pedal techniques cropping up on occasions. Considerably heavy and progressive for the time and holding up as sturdy backbones for the songs.

Nearly every other song feels like an anthem, or one of importance. The radio hit "Breaking The Law" probably needs no introduction. "United" a true spirited sing along that combines the groove and grit of metal riffage with a shoulder to shoulder chorus of unity. "Red, White & Blue" sounds like an alternative, metallic version of the American anthem and was actually a popular live song when they toured there. Each song has its own reason to be great and my favorite might just be "The Rage" for its genre bender intro which could pass as a piece of Reggae or Dub before crashing in with a thunderous beast of a riff, excelling into a ferocious atmosphere led by Rob's vocal foray.

Its the moments where Rob unleashes the high end of his range that are truly riveting. The power, speed and pitch is mighty and unrivaled as he broods his way through songs, ready to unleash his climatic falsetto at the given moment. Even more impressive is the length he can hold these notes for, reaching mountainous heights and holding his breath longer than the listener. The guitar solos also leave a lasting mark on metal with a slightly chaotic flair that would influence bands like Slayer. They erupt and explode with an energy that illuminates with a frenetic momentum that could go in any direction. The whole thing is an absolute treasure and for its time you can't find a flaw with it. Its stood the test of time and as much as it did for them then, its still a Metal classic.