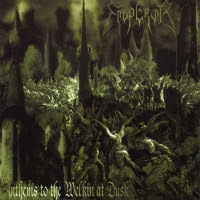 Riding the trail of illuminated stardust we descend from the cosmos into the deep majestic, endless forests of eternal darkness and enchanted beasts on the journey of our mortal souls. If ever the wonders of imagination evoked by natural beauty at night had a home, it is this. An inspired and truly astonishing feet of work that took Emperor's sound established on "In The Nightside Eclipse" to new heights. Epic, if ever truer a definition, its compass and wonder is its nature, one can only marvel in the shadow of music that so elegantly takes the extremities to the cutting edge of vision and composition. Skirmishing drums, razor blade guitars, devilish screams and shadowy symphonies meet on the battlefield to capture us with their imposing presence as we fill mercy to their persuasion.

"Anthems To The Welkin At Dusk" is Emporer's second full length and a hard one to follow with considering the widespread acclaim of their debut. With their drummer jailed and a bassist short Ihsahn and Samoth rejoined to write what is undoubtedly a masterful record that plays like a symphony, full of movements, progressions and climaxes. Every moment inspired and visionary the instruments fire on all cylinders as two guitars, drums, bass, vocals and multiple key lines show there prowess and technicality. At almost every point playing a unique lead, melody, tune, whatever you want to call the notation its a complex and genius arrangement of harmonization, uniting the instruments with the sparks of a darkest magic. It breathes and burgeons with a ferocious energy, barely containing its magic. The wall of sound bursting at the seams, every measurable noise ready to burst with light.

The mysterious record cover says a lot for the music. An amalgamation of dark castle spires deep in the forest, Gustave Dore's "Paradise Lost" angels sounding their trumpets for battle and the majestic shades of green, natures color. The fantasy, wonder and depths of the imagination this image might conjure is purely an extension of the musics inclination to that realm of fantasy. One which most likely takes a certain type of person to connect with.

So the record starts with a calming and soothing piece, steadily growing in intensity, always with a dark, mysterious undercurrent. One by one instruments chime and Ihsahn lures us in with ghostly whispers. They grow into shouts and bring us to an empiric horn section as if the dawn of battle has begun and in a swift track switch we are plunged in to the whirlwind of chaos and rattling blast beats and the almighty guitar riffage hits us with this full intensity. From here the pandemonium unravels itself with a frenzy of blazing fast paced guitars and rich symphonic bliss as this track and many others worm there way through the dark and black while lavishing us in melodic wonder through it thick sound. Its swiftness is intoxicating, a momentous weight of motion is unleashed as soaring riffs revel in their moment. Almost every song has its calm in the storm, a break to let the guitars and listener breath while the keys can drop in to take charge of a moment, replacing the aggression with awe.

The albums production clearly plays an important role in why this record works. Stepping away from the low-fidelity principles of their debut, Emperor exploit clarity to execute a denser complexity. The synths no longer an atmospheric accompaniment but a full partner in the musics direction. Within the expanded dimension Emperor cram all their musical might and it is pummeled together with a monstrously noisy drum kit which I think conjures a low-fi charm. I once thought the drums were poorly mixed, the pedals slap at high speeds and the ride cymbal cuts through the instruments. Over time I released the frantic energy the drums exude gives many of the albums moments its intensity.

The eight tracks make their mark, all of them offering a unique, captivating experience that peers deeper into the wonder. For the average listener a whirl of noise, for the seasoned Metal fan the atmosphere is as vivid and indulgent as it gets. Every time I revisit this record I find my catharsis again. It is so powerful and riveting it gives me goosebumps and refuels my energy for extreme music. Emperor undoubtedly solidified there status as Black Metal's greatest with this one but I think it is truly underappreciated in comparison. This is probably my second favorite record to grace my ears so far.