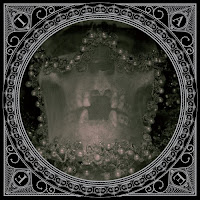 New York based experimental Metal outfit Tombs are back in 2016 with a short twenty-three minute EP. Impressed by their last fall length I picked this one up and at first failed to recognize the band I had heard before. What was interesting about "Savage Gold" was a seemingly normal Metal approach yielding an uncanny nuance that defied understanding on inspection. It had its way of feeling different and after many listens to "All Empires Fall" I think we are hearing the subtleties being ripped apart in different directions. The opening track throws together an atypical Thrash Metal groove that I could swear I've heard many times before. Its then overlapped with a dark Post-Metal guitar lead, tremolo picking itself through an epic reverb. In then comes crashing into a spacious synth laden slow down, building up the anticipation of the first full track.

"Obsidian" is that song, and it dispels the atmosphere with its hard and gritty Black Metal grind, pummeling through shifting, alternating blasts and evil riffage. The vocals crash in with a harsh penetrating tone that feels shrill and piercing, as if peaking the volume. Its not particularly enjoyable but the ears adjust as the song draws on. In this song the band slice in thrashier grooving riffs that highlight the aforementioned directions, where subtlety once guided the chemistry there is now a noticeable shift, however its not a negative aspect of the song, more of an observation in change.

"Deciever" is considerably more along the lines of what I expected with Thrash grooves slowed down into a temperate environment, lighter growls and accenting lead guitars craft a big mood in a steady setting, gradually elevating with increasing lead guitar focus. "V" finds a balance between the two styles and progresses its way through a rather epic passage of riffs.

I didn't feel much cohesion on this record, the last two songs made more sense together than the others however my favorite track was the non Metal track "Last Days Of Sunlight" for its brooding atmosphere and sense of impending dread. A great listen with good songs but it didn't flow well or amount to something grander than the sum of its parts.