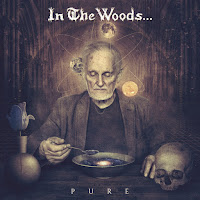 Surprises seem to be common this year and there is certainly a contest for most "unexpected". The news of a new record almost passed me by, surely "Pure" is just some compilation record I thought... "In The Woods..." are an obscure Black Metal band who released the remarkable "HEart Of The Ages" in 1995. It was and still is an obscure release, an absolute gem to me in my youth, a distinctly different record for the time that homed in on inspired pagan and nature themes within the stark context of extreme music. It still strikes a nerve with me to this day, unfortunately I didn't get along with the two following records, which moved in an Avant-Garde direction, the band then split in 2003 and here we are thirteen years later. As I look up the history of their lineup I learn that the only change is singer Fogerty, the other three have been in the band since day one, I find this interesting because this record gave me some serious "one man band" vibes, a curiosity in the cover that had me painting the records voice, Fogerty, as a lone musical force. This should be a compliment to how "together" this record feels and how much the identity of their roots is intact.

"Pure" is lengthy, a sixty seven minute epic that has no measure in pace. Its a Post-Black Metal record in the truest sense where traditional values have been further removed as its extremities give way to the vision that Fogerty illuminates with his raw and charismatic, heathen voice which calls out from across the mountains. In its mercy of natural wonder a burgeoning of emotion spills through the music in many moments of this record, there awakening built through lengthy passageways of dense progressive music. With a lot of clarity and volume these instruments carry forth an honesty in the raw, chunky guitar distortions, loose drum environment, nostalgic archaic synths and ethereal acoustics that harbor the authentic, natural qualities of low fidelity without compromise in its audibility.

The band immerses us in rich atmospheres as there songs, one by one, move through the motions, varying metallic intensities, dropping back for acoustic moments and soaring with earthly vocals. Its all a familiar affair as many composition techniques are the same as on that classic debut. "Towards The Black Surreal" has a deja-vu moment where the song suddenly shifts to a seemingly identical piece of music, bar one or two notes, from "Yearning The Seeds Of A New Dimension". There is no moment quite the same, but in seems two parts of guitars and vocals overlap perfectly, capturing the beauty of their early music.

As much as ill rave about this record, it has a flaw. I felt in the right mood it would captivate and transcend yet It wasn't one to make that happen through the music alone. "Pure" has a stunning tone and solid aesthetic to match but mostly it draws through temperate passages that only light up if in the mood, however it is littered with plenty of attention grabbing moments too. Whats most remarkable is how alike to their debut this record is. Overall its got a meatier sound and no breakaway tracks like "Morning The Death Of Aase" and "Pigeon" but they are just differences. I hope this return is not a one off, the band still have a lot to offer.