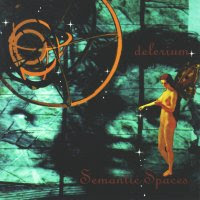 Id not heard of Delerium before receiving this recommendation, however I had heard the Tiesto remix of their famous "Silence" Trance song. I'm also familiar with Front Line Assembly a Canadian Industrial group who flirted with Metal on their most commercially successful venture "Millennium" released the same year. Bill Leeb and Rhys Fulber of the band formed this side project in 1987, a year after FLA, and released a prolific seven full lengths before this release, which is one of three in the year of ninety four. Its a lengthy record of steady moving electronic pieces tinging on ambience and encompassing a eastern, worldly cultural influences, very much reflective of the times.

With an arsenal of synthetic instruments the two line the back bone of these songs with layers of smooth flowing electronics, light and short wanderings of shimmering melodies, a few select sections of composition interwoven to form a dense music current that runs the course of these lengthy tracks. They are steady, smooth, calming and conjure a mellow atmosphere that's slightly juxtaposed to the actual level of instrumental activity. Looping percussive samples and bold, plump baselines hold the repetitions firmly in place, gluing the instruments together as they set the stage.

The magic happens in the forefront, this thick spine of instrumentation goes through the motions, expanding, contracting, coming and going with the flow of the music. Its the airy synths, feminine vocals, soft pianos and lead synths that inspire direction and determine the path the songs take. Some distinct cultural sounds come to this stage, eastern flutes and Gregorian chants sung by monks and choirs give the record an ethnic root that contrasts its electronic and modern persona.

With a firmly nineties electronic sound one can hear all sorts of influences from Trip Hop, to Dub, Trance, Downtempo, House and all between. Its a melting pot of that eras sound and it comes together seamlessly. There's little to criticize, the music is inspired and creates quite the setting for thought and indulgence however its not particularly thrilling. The smooth and easy flow often stagnates in places as the songs strength beyond the seven minute mark with not much more than a repeat of a previous segment. I may return to this one again, It feels like the sort of record you could grow to adore if it were in the background of some game, slowly drilling itself deep into your mind.