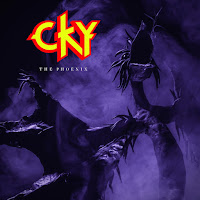 The legendary CKY from West Chester, Pennsylvania, also known as "Camp Kill Yourself", were a fond part of my youth. Soundtrack to the CKY movies full of skateboarding, pranks and tomfoolery, their songs were drilled into my mind as we watched them over and over alongside Jackass. I often return to their first two records and had the opportunity to see them live for the second time in a small and intimate venue recently. It got me hyped up for this record after having barely heard a thing from them in over a decade.

This is the bands first record without former front man Deron Miller who departed back in 2011. He's one of the original three and in his absence Chad Ginsburg has stepped up taking on the vocal role, performing the guitars, synths and continuing his duty as the bands producer. In Deron's absence their persona hasn't been tarnished, the music comes from the same place and Chad has the voice to fill his boots with a very similar vocal style that you may not of noticed had changed if you picked this record up unknowing to the lineup change.

The Phoenix is an album for the stage. Fun, lively and energetic, full of charisma. CKY continue to develop their unique sound while boldly showing their influences as flaming guitar licks emerge from their more traditional, grungy power chord grooving. With Chad in the limelight he takes the opportunity to show off his inspiring guitar skills with tones of wild, soaring guitar solos, blazing a trail of notes to try and keep up with as he quite frequently gets into the roll, especially on "Days Of Self Destruction" where the last ninety seconds of the song is dedicated to nothing but the shred!.

Many of the songs have similarities to their early classics, however they feel fleshed out with thick instrumentation that has synths humming between the cracks of bold audacious baselines that prowl and groove. The guitar leads stack up over the power chords with short lively melodies and Jess's drumming holds in all together with a subtle roll to gel everything together without being overly present. The sort of performance to impress when given due attention.

I love the density of this record. Without being overtly heavy CKY shine on the musicality that loads every passing moment with depth as everything has an intricacy. Although the song structures are rather formulaic and many sections repeat it always feels big and ambitious without being "heavy". Chad's Hard Rock and Funk influences definitely make themselves known here without taking away from their core sound. Its a very solid record with a few songs to match some of the classics.