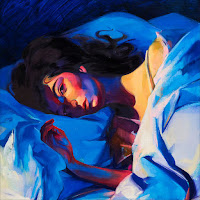 Fun fact for you, Lorde is the first musician in my archive from New Zeland! The young singer made her mark on pop music a few years back as a raw talent and teenage sensation, however this record is the first Ive heard of her. Written alongside Jack Antanoff "Melodrama" is fundamentally an introspection of party life, drinking culture, relationships and breakups, dramatized and illuminated in the ever passing Ethereal haze of glossy, reverberated instruments and Lorde's breathy soft yet strong voice. Its written and performed beautifully, playing with an ever growing sense of meaning as the record builds upon itself, climaxing with a couple of great songs at the end.

This introspection is a poetic rendition of moments that matter, its a glorification and resolve simultaneously as Lorde works through the two themes that clash in my mind. Between the cracks of party culture and substance euphoria, Lorde finds some stunning sentiments, "I'll love you till you call the cops on me" when the record swings back to her heartbreak. Inspired moments like this come through both lyrically and musically, a strength that frequents as moving lyrics collide with swooning instrumentation and she immortalizes her pain.

The concurrence of a smooth, bright piano makes it way though the songs, alongside Lorde, as contractions of muffled slow dance beats shuffle the tone and tempo. A frequent of click beats guide many of the percussive tracks and the emergence of dense synths and electronic jitters make up the sounds that character the record and develop its songs, often wrapped in shapely reverbs that craft the atmosphere. Its chemistry matches the range for vulnerability and strength as the emotions come through in sturdily sung notes of resilience and the moments where her singing collapses to a breathy talk in the wake of her words.

Its a powerful performance that hits you on the personal level with tracks like "Liability" and can lift your mood up with timeless hooks like the chorus of "Perfect Places", an elevating end to a fine record that has little to fault other than your preference of subject matter. Its a cleverly crafted, inspired piece of genuine "pop" or "popular appeal" music that almost anyone could get their teeth into. Considering words are often a weak point for me with music It probably a testament to the strength of her articulation, I'll end this ramble with one of my favorite lines "I am a toy, that people enjoy, until the tricks don't work anymore". Beautiful musings.