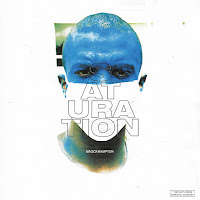 Having heard nothing other than hype and praise of this fourteen strong Hip Hop collective from Texas, I walk away from their debut album, one of three released last year, somewhat disappointed. Brockhampton certainly have character and a style that is their own but their best comes among a mixed bag of tricks. They do however, at times, represent the traditional focus of beats and rhymes against the current trend of Mumble Rap and glossy trap beats, so It felt more at home having rhyme schemes to follow. That being said various members of the group drop in with loose flows and trendy auto-tune hooks too. Its pulled from a different angle but not always hitting the mark.

The instrumentals prop up a lot of this record with spacial textural arrangements creating a back bone of quirky flavor and depth in the sound, feeling both interesting, lasting and very synthetic. Deep growling baselines drop in and out as an assortment of instruments, vocals snippets and the like create an inviting, zany mood to indulge in as its light presence provides both the tone and interest for a keen ear picking out the various manipulations and construct of these well crafted beats ranging from soft and swooning to dark, gritty and Industrial alike grooves. Not everything pulls off well but the constant flow of luminous beats makes for a fun listen with plenty of tunes to get stuck in your mind as well as classic lines like "Ill break your neck so you can watch your back".

Diversity is the records hallmark but not its strength. With so many voices and styles one song to another could sound from different records entirely. Traditional flows mix in among some members who play the one word rhyme game, the difference in quality is obvious between sharp rhyme writers and slur sprayers clutching on curses. As the album grows pitch shifted raps pop in with chipmunk like vocal manipulations, dropping trashy rhymes. Using auto tune and the like another flavor is thrown in the mix and the vibes shift swiftly. Despite this "Fake" is a favorite songs with its fantastic "yippy yay" chorus. This vocal inconstancy make it feel like another project all together.

With a large pallet of voices the album ultimately sways from its sides as the group pull together different styles with a lack of structure or organization. In a way it gives it a looser, free flow feel, as if the music for is a playground for anyone to jump in. That notion may become endearing with more time on this record but as previously said its mixed bag of tricks, its highs parallel to its lows.