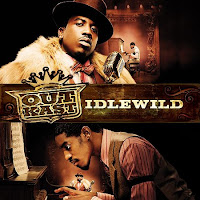 On this music blog we have covered all but the legendary Outkast's last album. 2015 was marked by my discovery of a group who had always been there in my youth, on MTV and in the sound tracks of games but I never made the connection. Going through their albums one by one introduced my two the journey of two very talented individuals who brought a wealth of brilliance to the Hip Hop game. I lost my steam after their double solo records and given the negative press on this album I let it pass by but this year I want to fill in some gaps and tie up loose ends with artists who's discographies are incomplete to my ears.

Idlewild is unsurprising with its direction given the duo have steadily broadened their horizons. Andre's role as a producer continues to push the boundaries of Hip Hop but this time the duo take a leap into a specific vision nestled in the roots of Swing, Jazz, Soul and Blues from the first half of the century, bringing in a fresh pallet of instruments alongside is drum machine. Its tang and flavor comes on so strong that for most of the record the Hip Hop aspect seems secondary as crisp, sharp tightly fit drum arrangements hold a tempo for the retro theme to shape the tone, however with heavy use of electronic synths it too is pulled in slightly alien directions at times. I'm exaggerating a little, the raps hold in firmly in territory but instrumentally its vibe is persuasively retroactive.

A sense of theme is obvious musically but lyrically and thematically there are hints of narrative that come in from different angles. Is Idlewild a film? A tale? Its a DVD being bootlegged according to one interlude track of which their are many on this twenty five track stretch. Its a scattered idea that Idlewild is more than just the setting for the duos emotional, self expressive raps as the lyrical themes occasionally sync up. Its a typical flurry of topical raps that offer food for thought, Andre on "Mighty O" stabbing into systemic racism and the war on drugs yet on "When I Look Into Your Eyes" we are whisked back generations to piano heavy Swing with a very contrasting tone. The consistency should be a minor indifference but seems important given the high bar Outkast have set for themselves.

With their ambition and innovations for Hip Hop firmly proven, the album plays like two geniuses falling into a routine. Despite its successful attempt to circumvent norms and stylistically define itself with a vivid, romanticized theme, the album falls short of feeling as necessary and urgent as they once did on Stankonia. They have little to prove and so the duo flex their skills again for a charming, indulgent, mature experience. With the best tools at their disposal the artistry is gleaming but the fire behind is dim. Its a fickle thing to explain but a great album falls short when expectations are so high. Idlewild is a stunning place, a gorgeous listen but one without that spark to drag you back.