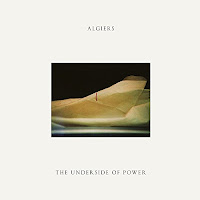 I first heard of this record in relation to Zeal And Ardor, referencing the singing which harbors bold accents of chain gang vocals and origin blues vocals. That lured me close and Ive since been sucked into this fantastically dark and rooted musical experience. Hailing from the southern city of Atlanta, Algiers are primarily a Post-Punk band fronted by singer Franklin Fisher, who's voice is a constant pleasure, strong and powerful he acts like the guiding light that unifies the mood and meaning of the instrumentals and gospel singers parading behind him. This is their sophomore album released last year to much critical acclaim and I have to share in their praise of these forty four minute of engrossing musical art.

Firmly at the core of the sound is a Post-Punk vibe emboldened by the dense, punchy baselines that patrol the musics underbelly, making itself known, laying a foundation for the atmospheres forged above. Its tight with the percussion, a refreshingly modern aesthetic that's executed without flash and flare. The tricky shuffles of fast high hats and grooving sub kicks of Trap music is to be heard but the approach is a million miles away from formulaic Hip Hop beats. With a wealth of kit samples, programmed sequences avoid repetition and meld seemingly like a drummer following the musics intensity and complimenting it as such. At times its organic and can appropriately take on a more mechanical Industrial form when its called for in darker times.

Out front, loading the music with texture, dynamism and charisma is an arsenal of instruments. Guitars, pianos, keyboards playing a myriad of synth tones, the saxophone, stringed instruments and even a glockenspiel makes an appearance as the four multi-instrumentalists utilize their talents in the dense web of sound they create together. It can be a lot to unpackage and after many, many plays through the soundscapes still feel like a maze of detail to stair into. Under its emergent melodies play drones, distortions and memorizing rattles of reverberated sounds that somehow don't descend into chaos and broaden the scope of sound.

The record flows with a sense of progression, in its opening phases Fisher commands the music with his empowered, deep, emotive voice, flexing his words with expressive affections that resonate with Blues and Soul vibes. The music is inherently dark in a personal manor, burden and destitute surround his voice, the source of strength and uplift that lurks beyond the pale. There is an almost biblical quality to the epic that is his presence and on the title track we have a moment of gleam and uplift, overcoming the horror as choral gospel chants illuminate his performance rising up above all else. As the record progresses the instrumentals seemingly grow and overtake his importance as the drums get more mechanical and two tracks nearing end have him in absence.

The Underside Of Power is a riveting experience devoid of a weak spot. Its engrossing chemistry of powerful song writing and an energetic textural experience lasts its run time without a hitch. Everything feels meaningful and full of purpose. Without a gimmick or flash in the pan this really feel like an album to stand the test of time. Its place in the musical landscape is unique, its not pushing boundaries in any direction but showing where overlaps are to made, a combination of influences and sounds that becomes more than all its apparent parts. Truly wonderful.