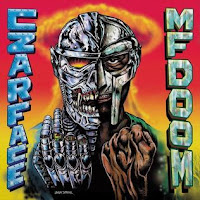 Hip Hop trio Czarface consists of underground Boston duo 7LES and the legendary Inspectah Deck of the Wu-Tang Clan. I had not heard of the project before but a collaboration with the esteemed MF Doom put it on many radars, myself included. The album takes on a wonderful persona from the get go and sticks with from start to end. Its loaded with sharp, keen and witty lyricism, especially from Inspectah and Doom, creating a sweet vibe that holds. Themes of super heroes and villains, a fantasy world akin to comic culture plays out through beats, rhymes and alter egos as the fantastic narrating voice of Czarface guides us through the tracks with playful interludes and conversing. The tone of the voice is sublime, its gravely, animated and enthusiastic, the words of an evil mastermind leap of the comic book pages, you know who is talking.

The records instrumentals are a careful craft of tight drum loops and cherry picked samples arranged to liven the atmosphere with its texture and unobtrusive melodies. Its got depth that lasts with each listen and given its range of variations and attention to detail one can find a lot to enjoy in the production alone, especially the tracks with multiple phases and animated sound effects that illuminate rhymes and interludes.

Above the noise the three rappers take on loose directions loaded with clever rhyme schemes and a plethora of cultural and musical references weaved into their flows, as well as other rappers classic lines too. There is probably a lot I'm missing to given my lack of knowledge on comic characters but the free association style naturally draws attention to the wit revolved around a point of reference and sounds a lot more generalized as consequence to my ignorance. The beats however vividly conjure the fantasy vibes of villains and super heroes battling it out in a world of good and evil.

The record doesn't hit any peaks, nor does it dip into valleys. It rolls around at a keen and steady pace with every song hitting a firm grade of quality, delivering the goods from start to end. If I could fault anything it may be the consistency itself. On the lyrical front the record rarely lets up from the similar style of rhyming all three share and so the references and puns just keep coming and loose spark based on the listeners appetite. The instrumentals however are continually exciting as they create striking atmospheres again and again, I think its actually the stronger half of the formula against two of Hip Hops best MCs. Strong album, really enjoyable.