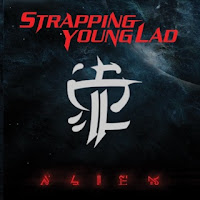 Brainchild of musical genius Devin Townsend and emotional vent for his negativity and aggression, SYL stands alone as a vessel of extremity that other bands simply can't come close to. He is known as Hevy Devy with good reason, this is his domain where heavy goes above and beyond the sonic expectations of the time. His groundbreaking record City still holds up today and deserves its merit as one of the heaviest records of all time. Pioneering a modernized wall of sound production for Metal music, Devin has not just peaked the aesthetic approach but his unique personality and niche for composition emanates through the music. It puts him into that unchallenged place in the hearts of listeners. Alien is the only other SYL record to give City a run for its money and births one of Metal's best ever songs with a truly epic fusion of sing along hooks and monstrous grooves on Love.

Alien is a sonic experience, a whirlwind of fire and fury channeled through rhythmic grooves, exaggerated in the calamity of instruments howling together. If Dev has a partner in crime its Gene Hoglan. His distinctly jolting playing from behind the drum kit reinforces every strike and rhythm with endless flashes of dexterous rolls, hammering out maddening intricate patterns from atypical beats. He is a perfect complement to Devin's wall of sound approach, as its dirty crunching distortion guitars slam up against pounding baselines and a haze of industrial electronic sounds buried in the loudness. Its all propelled onward by slick pedals thumping in more electricity to the overflowing mess. I'm in awe of Hoglans machine like drumming.

The songwriting is prodigal. There is tandem between aesthetic and music, both extreme in nature, which can easily leave a record lopsided but the frustration and passion in Dev's immediate roars and blunt language, cries of "I hate myself" and the shrieking "fuck you" of Shitstorm mirrors all the emotional immediacy. Right as his scream burns every ounce of feeling, a sonic flood of high pitched synths fill the space as its the textural experience ascends. The path these songs take are sublime, fast turns through soaring heights into dizzying plummets cohesively following a narrative while bringing about an arsenal of unique riffs. When its applied in a more palatable sense with a formulaic song structure and a catchy hook you get the brilliance of Love.

With clattering drums,a scattering of subtle industrial noises and cutting synths the guitar plays a very centralized roll as the instrument pulling it all together. At times thick distortions play power chord arrangements but most impressively is the ramping up of production to extrapolate dense, gurgling chugs from palm muted picked grooves. In time with the guitars direction it can take on Djent like tones as Dev throws in obnoxious riffs that relish in the simplistic pleasures of absurd, over emphasized bends and open string chugs. Its a true head banging delight as its stamina charges through fields of unrelenting madness over and over again.

Alien kicks of with a racket. Front loading its most absurd, attention grabbing songs to then lead us though a more melodic pass for lack of a better word with Love and Shine. We Ride goes all out crazy with a battering of hard grinding riffs to unleash an unusual solo, clearly taking a different approach to the lead guitar that grows into the song. Then Possessions hits another climax with Devin deploying stunning infectious sections and continually upping the anti on them. In those two songs I feel like we hear more of the Dev you might expect on a solo project, except the music is extremified. Two Weeks give us a breather with a gorgeous, exotic and peaceful instrumental, it breaks the flow and the last two songs step in directions that don't quite come full circle.

With every listen I feel like its the type of record that needs to go out with a bang. There is no denying how utterly fantastic this record is and I am humbled to spoiled by rediscovering it. SYL will always be a favorite but with such a sea of music to drown in its amazing how much time can pass distant from music that's truly riveting. Strapping Young Lad where a huge deal growing up and I feel it is only right to do the rounds on their back catalog and cover a couple of records I never quite got to grips with. Looking forward to it. Can never get enough of the genius Devin Townsend!