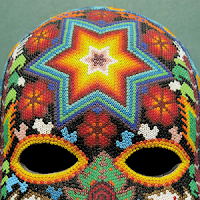 Blessed we are to have another Dead Can Dance project on our hands. After a six year absence the duo return with a mid length, sweet and exotic piece of music. Its around seven songs split into two sixteen and nineteen minute tracks. Through the journey of this blog I have been digging into their catalog and unearthing several gems, Aion being the first. They compose and perform meditative, spiritual music inspired by historical, cultural and worldly sounds. Time has not been a hindrance, this release is fondly inspired and fit to sit among the best of their wonderful discography.

The first act is luscious, exotic and wild. A modern production doesn't particularly give the duo anything they couldn't achieve already but its crisp and silky aesthetic has the percussion popping. Earthly choral singing over viola strings sounds dazzling too. It has a warm climate feel that plays out with powerful melodies conjuring deep earthly moods, reinforced by vocal cries of emotion from under the building layers of exotic instrumentation. Its a very primitive and rooted experience, a scenic interlude of rain, howling and chirping of wildlife grounds the link between these songs as its final piece goes into a primitive trance. One can envision star splattered night skies, camp fires, ritualistic dancing and singing around the glowing flickers of flames.

The second act feels colder and humanistic, the pace and tone turn to a nightly setting and Perry brings mysterious language to his singing. Brooding cultural voices and dazzling melodies stir up a climatic build up on the following song. Its another engrossing atmosphere and then The Forest really throws things back in time with a warm, upfront and gently bouncing baseline giving the track a Post-Punk feel, going back to their roots as a band. The singing is gorgeous, enriched by worldly travel. Its the albums peak as the following song slowly winds things down quietly as the record drifts back into the shadows from which it came. Its a brilliant record that does the best of what these two are known for with exquisite execution. The inspiration is ripe and with that a wonderful thirty plus minutes of riveting music has been birthed.