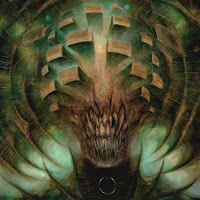 Its stunning album cover may be inline with modern trends of brutal music but getting past its darkly, mysterious intro track we arrive in a glorious revival of early Progressive and Technical Death Metal in the vein of Atheist, Death and Cynic. This album brings out the best machinations of that era, uniting pummeling rhythm sections with gleams of melodic uprise and challenging composition that illuminate the musical direction. Horrendous are now a decade into their career and the heaps of praise this record recived brought them to my attention, I will be sure to explore the other three records that make up their back catalog as this fantastic release commands it.

That musical experience of a matured band shows itself through brilliant songwriting that captivates with excellence as monstrous assaulting guitar grooves dance with dexterous baselines filling the experience with an involved depth as the instruments fire together. The drums take on a more complimentary roll, firing off with the shifts, twists and turns of the music and rarely devolving into a straight beat. Blast beats are not plentiful as the band taken a more measured approach to brutality. Its utilized with appropriate timing given the musical direction which often starts out flexing its intensity and then bringing in licks of lead guitar melody and colorful shifts in tone that on a couple of tracks end up in a musical whirlwind you can't get enough of.

With snarly shouts at its fore front, the band avoid a bore with somewhat monotone voicing as the screams and shouts hinge on the pacing, dropping in with varied measures between each cry. It sits nicely over the complex music which is busying through its riffs, shuffling them around and always leading to sonic bursts of lead guitar fire that ignite these already excitable atmospheres of metallic chaos where anything can happen. Its a wild ride that packs in its best numbers at the front of the album, although everything on display is rock solid and the record does close itself with an epic string of riffs on its mighty eight minute epic Obolous.

The production is feasible, capturing the thick warmness of an older record without going overboard on clarity. Its acoustic guitars bring a moonlight shimmering tone to the record that spellbounds the atmosphere on Devotion and other parts of the msuic they grace. The guitars have a bright and filling thrash tone, the drums crunchy and ever present. The bass guitar gets the upfront treatment it deserves as it filling the belly with restless scale exploring. When it does mirror the guitars its usually with a classic Death Metal off note harmonization. Idol is brilliant for simply just that. All though it revives an old sound, it does so without statement, just residing in that era.