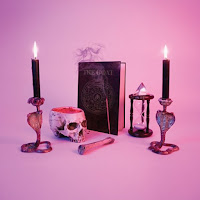 Could it be that this new year starts with its best release? If you needed something to sweep you off your feet then The Goat is it. I'd been keenly awaiting English trio Puppy's debut album after adoring their EP Vol II. Id also heard a few of these new songs live at Download Festival and other shows. Now with the music put to wax I hope a spark is lit for them, its become increasingly harder for small acts in the shrinking world of rock music to get noticed. Even with an utterly fantastic debut record like this it may not be enough but this album is a success of its own making.

With an ear for Alternative Rock moods, the stature of Classic Rock licks and momentous sways of Groove Metal's simple bombastic grooves, Puppy electrify through their brilliant guitar work. It requires no exaggeration through dense distortions or cheap thrills. With a sublime vocal presence the album rolls out like a perpetual riff fest that will tug on your emotions and give you a soar neck. The setting is ripe and fond, a keen production that brings the trio together with a crisp crunchy flavor illuminated by harmonious layered vocals that frequently culminate together.

Opening with a Nu Metal syncopated groove to roll back the years, album opener Black Holes gets the record rolling as an example of the dynamism heard throughout. Swaying between crunchy stomping riffs and joyous, emotive chord arrangements the arsenal of riffs lead into a beautiful, earnest singing as it does over and over through the twelve songs. It never tires! This record has been on repeat since its release five days ago and I'm drowning in my adoration for the magic moods it conjures.

As the album progress it feels like the more varied cuts stack up in the second half. A different vocalist on I Feel An Evil, the emergence of a blast beat and a couple of heavier drum patterns keep the records momentum swinging after the timeless sonic grooves of Entombed from Vol II goes by. It holds some of the heaviest riffs and a couple of guitar leads too. It makes for two excellent halves of a whole.

The Goat is never dramatic, self-indulged or too serious. Its continuously fun, uplifting and light hearted yet its music comes from a genuine source of expression. The continual unleashing of riffs will have you writing off lists of bands, riffs and fond similarities, mostly from the 90s decade. As a band they wear their influences loud and proud yet have a dynamite chemistry to express themselves with an originality that can only be known as Puppy. The punch of Metal, the class of Rock, the emotions of Alternative Rock and even a little Grunge ferocity in moments, they have it all.

After a couple of spins a more current, and now obvious parallel, revealed itself. Singer Howard has beautiful vocal range with a tone not far from Papa Emeritus of Ghost at times. Once I made that link tracks like Poor Me sounded uncannily alike in a handful of instances, that and the darkly interpretation of religion in their artwort. There is something similar at work in these bands reinventing the old and its wonderful.

I cannot get over how good this record is. If I had anything to be critical of it would be the formula of the songs. Puppy have such a riveting presence and arsenal of riffs it almost feels as if the music is pegged back from spreading its wings and exploring progressive tangents. The band stick with straight forward structures, three to four minute song lengths and it serves them well but my taste would delight in this group daring and experimenting however its their first record and I shouldn't get ahead of myself, this promising young outfit have well and truly delivered with The Goat.